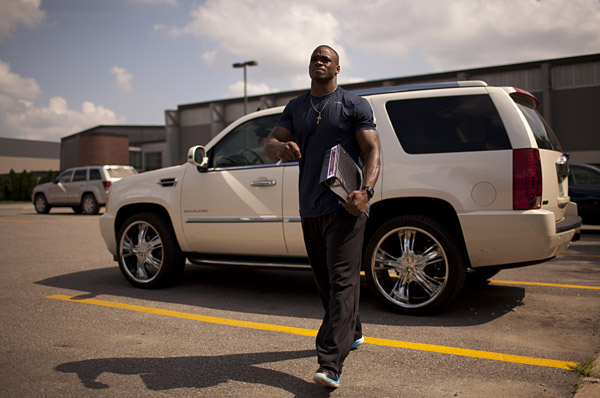 Here were Barry Sanders’ rushing totals through 10 games in 1997, the year he ran for 2,053 yards and won NFL co-MVP honors with Brett Favre:

Here are Adrian Peterson’s rushing totals through the Vikings’ first 10 games this season:

Forget NFL Comeback Player of the Year. Peterson has a much bigger  trophy within his powerful grasp: NFL Most Valuable Player.

“It’s hard to imagine another guy having a greater impact on his team,” Vikings coach Leslie Frazier said. “Especially considering where we are and what we have to do every single week to win. … He’s pulling away with his domination as a runner.”

“Watching him do what he does, he’s only getting stronger as the year goes on,” Vikings tight end Kyle Rudolph said of Peterson. “I think Adrian can carry us as far as Adrian wants.”

Only 15 running backs — compared with 35 quarterbacks — have won The Associated Press’ top individual award, which was called the “Most Outstanding Player” from 1957 to 1960 and “Most Valuable Player” beginning in 1961. Eleven of those running backs are in the Pro Football Hall of Fame and a 12th — LaDainian Tomlinson — will join them when he’s eligible.

Peterson’s 10-game start is better in terms of rushing total and average per carry than 10 of the 15 running backs that won MVP. Eight of those are Hall of Famers. One is Tomlinson.

And, oh yeah, Peterson’s start also is better than one other pretty good player: pre-surgery Peterson, whose best 10-game start was 1,100 yards and a 4.9 average in 2008.

In other words, Peterson has done the unthinkable: He actually did get better, just as he said he would. His strength is as good as ever. His top-end speed is returning. And the road back to 100 percent actually taught him the benefits of being a more patient runner.

“There are some things that he’s doing that make you scratch your head and say, ‘Maybe he will be better than he was before the injury,’ ” Frazier said. “His hands are better, some of his cuts, his burst, he’s staying more true to his reads, these are some things he hadn’t done before the injury. He’d always look to hit the home run, and sometimes that would create negative plays. Now he’s truer to his reads, and it’s helping our offensive line to be better at what they do.”

The Vikings (6-4) have twice as many victories as they had last season. But a 5-5 record and a three-game losing streak seemed like a distinct possibility midway through the fourth quarter of Sunday’s game against Detroit.

The Lions had just scored a touchdown to increase their league-leading fourth-quarter point total to 111. At that point, the Vikings led 24-17 and questions abounded during a nervous few moments inside the Metrodome. Would offensive coordinator Bill Musgrave call the right plays? Would quarterback Christian Ponder show enough poise? Would the defense hold up?

No sweat. The defense watched Musgrave tell Ponder to hand Peterson the ball on six consecutive plays over two possessions. The result: 105 yards, including a 61-yard touchdown run, and a 34-17 lead. Ballgame.

“He’s a joy to watch,” Frazier said. “I think all of us should cherish having the chance to watch him live.”