Alleged burglar fails to show up for court, now back in the slammer

This news story was published on September 24, 2012.
Advertise on NIT • Subscribe to NIT

MASON CITY – A man accused by several police departments of burglary and other crimes failed to show up for court last week and is now in the Cerro Gordo County Jail.

Wright was supposed to appear in Cerro Gordo County Court on September 17th for arraignment on charges brought by the Mason City Police Department for third degree burglary. Wright allegedly attempted to enter unoccupied vehicles in the parking lots of Target and Mills Fleet Farm on August 12, 2012. When he failed to appear, a warrant for his arrest was issued by Judge Greg Rosenbladt.

Wright is also awaiting a court appearance in 2013 for possession of drug paraphernalia and public intoxication from the incident on August 12th.

He will face trial in Mitchell County on October 17th, 2012 for those charges.

Wright plead guilty to possession of drug paraphernalia after being cited by Clear Lake police for a May 20, 2012 incident and given a $150 fine by Judge Ronald Wagenaar.  Wright still owes $288.75 in fines and costs from that case. 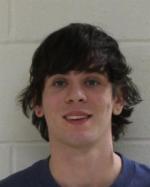 3 Responses to Alleged burglar fails to show up for court, now back in the slammer