In ‘a story of betrayal,’ Jerry Sandusky faces life in prison 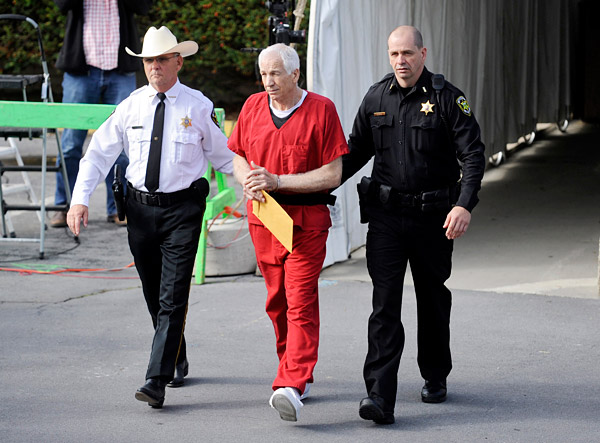 Former Penn State football coach Jerry Sandusky was sentenced Tuesday to a minimum of 30 years in prison, meaning he will likely spend the rest of his life behind bars in a child sex-abuse scandal that roiled the nation and the shook the sports powerhouse.

The sentence of 30 years to 60 years in prison was far less than the 400 years that Judge John Cleland could have imposed, but it means that Sandusky would be almost 100 years old before he has any chance of being released. Going into the sentencing phase, both defense attorneys and prosecutors had expected that Sandusky would spend the rest of his life in prison.

Cleland issued the sentence Tuesday in the same Bellefonte, Pa., courthouse where Sandusky had been convicted in June of 45 counts of molesting 10 boys during a 15-year period. The boys had participated in a charitable organization that Sandusky had founded for disadvantaged youth.

“The tragedy of this crime is that it’s a story of betrayal. The most obvious aspect is your betrayal of 10 children,” Cleland said. “You abused the trust of those who trusted you.”

Cleland said he expected Sandusky to spend the rest of life in prison and designated him a sexually violent predator, a technical label that carries a severe type of monitoring if Sandusky were ever to be released.

Sandusky was defiant on Tuesday, again maintaining that he was innocent of all charges. The former coach never testified at his trial after prosecutors threatened to put his adopted son on the stand. The son has said he was prepared to testify that he too was sexually abused.

In his rambling 15-minute statement, Sandusky rejected ever doing “these alleged disgusting acts,” and described himself as a victim. His statement was similar to a three-minute monologue played Monday night on Penn State Com Radio during which the former coach said that Penn State, investigators, civil attorneys, the media and others had conspired to bring him down.

But three of Sandusky’s victims painted a different picture when they spoke, according to media reports from inside the courtroom.

A man who was 11 when Sandusky groped him in a shower in 1998 said Sandusky is in denial and should “stop coming up with excuses.”

“I’ve been left with deep, painful wounds that you caused and had been buried in the garden of my heart for many years,” he said.

Another man, who was 13 in 2001 when Sandusky took him into a Penn State shower room and forced him to touch the ex-coach, spoke in court:

“I am troubled with flashbacks of his naked body, something that will never be erased from my memory,” he said. “Jerry has harmed children, of which I am one of them.”

“Since the Sandusky story first broke, usage of RAINN’s National Sexual Assault Online Hotline has increased 47 percent, as thousands of survivors have come forward for the first time.

“Now that Sandusky will be locked up and unable to harm more children, our hope is that even more survivors will take their first steps towards recovery — with the confidence that their family, friends and community will believe them and support them,” said Scott Berkowitz, president and founder of the Rape, Abuse & Incest National Network, which describes itself as the nation’s largest anti-sexual violence organization.

While the sentencing marks the end of the current chapter in the Sandusky scandal, the effects will be felt for years. At least four of Sandusky’s victims have filed lawsuits against the school and more are expected.

The school was severely punished by the NCAA, the nation’s overseeing body for collegiate athletics, socked with a $60-million fine, a ban on postseason play and a reduction in the number of football scholarships the school can award.

The NCAA also erased 14 years of victories for Hall of Fame coach Joe Paterno, which destroyed his career milestone as major college football’s winningest coach. Paterno was forced to quit, then died of lung cancer in January.

Also forced out of his post was university president Graham Spanier. Still awaiting trial sometime early next year are Gary Schultz and Tim Curley, two university administrators charged with perjury for allegedly lying to a grand jury investigating the scandal. They are also charged with failing to report suspicions about Sandusky to outside authorities.

An internal investigation led by former FBI director Louis J. Freeh concluded that Paterno and other top officials covered up allegations against Sandusky for years to avoid bad publicity and to protect the football program.

Defense attorney Joe Amendola said he plans to appeal, arguing that Sandusky deserves a new trial on grounds that Cleland incorrectly denied his repeated requests for a delay.