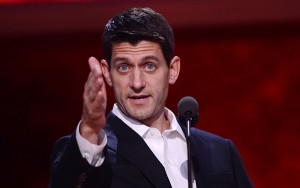 CEDAR RAPIDS — Vice presidential nominee Paul Ryan on Tuesday tried to defuse the uproar caused by his boss’ comments about Americans’ dependency on the federal government.

“It was an inarticulate way to make this point: Too many people are having such a hard time getting back on a path to prosperity,” Ryan said about GOP presidential nominee Mitt Romney’s comment that 47 percent of Americans pay no income tax and depend on government services.

“Because of the stagnant Obama economy, more and more people are becoming dependent on the government,” Ryan told KCRG-TV9’s Beth Malicki during an interview Tuesday. He said he and Romney are pushing proposals for “reigniting economic growth … to get people from government dependency into lives of prosperity and upward mobility.”

His comment came a day after the release of a leaked video from a private Florida fundraiser in which Romney appears to dismiss President Barack Obama’s backers as those who take no responsibility for their lives and think they are entitled to government handouts.

Democrats jumped on Romney’s remarks, suggesting they are evidence that the former Massachusetts governor is out of touch with the American people.

“It’s hard to serve as a president of all Americans when you fail the character test and write off and insult half the country you want to lead,” said Iowa Democratic Party Chairwoman Sue Dvorsky of Coralville. “It is extremely difficult to imagine how a person who seeks the office of the presidency would be so divisive and have such contempt for his fellow Americans.”

While he conceded — repeatedly — that Romney’s remarks were “inarticulate,” Ryan said the opportunity Americans need to get ahead is being lost in the current economy, where unemployment has been above 8 percent for 43 months, 43 million people are looking for work and 15 percent of Americans are living in poverty.

“So it could have been better said, but the point remains, we want to get people from having to be dependent on government for their livelihoods to aspiration, opportunity, social mobility,” Ryan continued. “We want an opportunity society … where you can get a good job that pays good wages and gets you on a path of prosperity.”

And when people move up the economic ladder, Ryan and Romney want them to pay lower taxes. Their plan calls for a 20 percent across-the-board tax cut. However, Ryan said, those with higher income likely will pay more as tax loopholes — including tax shelters that are used disproportionately by higher-income earners — are closed.

“If you close these tax shelters, then more of their income is subject to taxation,” he said. “That allows us to lower tax rates for everybody.”

Ryan also called for extending the federal Farm Bill. He agrees with the bipartisan sentiment that direct subsidies to farmers should be “reformed out” while maintaining crop insurance “that farmers can bank on.”

3 Responses to Ryan: Focus belongs on economy, not Romney’s comments