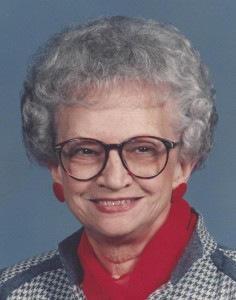 A Mass of Christian Burial will be held at 9:30 am, Saturday June 2, 2012 at Immaculate Conception Catholic Church. Officiating will be the Rev. Carl Ries. Interment will be in Calvary Cemetery. Visitation will be from 4 until 7:00 pm, Friday at Fullerton Hage Funeral Home, 401 Blunt and again one hour prior to services at the church. Scripture services will be held at 6:30 and a rosary following.  Condolences may be shared with the family at www.Fullertonfh.com

Thelma Mae was born on December 16, 1921 at Floyd, Iowa the daughter of Theron Virgil and Dora E. “Cole” Jacobson. She graduated with the class of 1939 at the Floyd Consolidated High School. She attended Iowa State University and the Iowa State Teachers College. She was qualified as a teacher but never entered the profession. She was united in marriage to John Virgil Reis on August 10, 1940 at Immaculate Conception Catholic Church. The couple then moved to Wichita Kansas for a few years. They returned to the Charles City area to farm for the next 10 years. Virgil preceded her in death in 1984. She worked at Clark Produce, egg candler for Mike Clark, Townsend Laundry and Cleaners, then in the Fabric Department and finally as manager for Red Owl. During the war she did her part working as a timekeeper at the Oliver Tractor Plant and Salsbury Home. Thelma was an excellent seamstress, making wedding dresses and doing alterations. She also made many of her and her families clothes. During her high school years she played in the band and that interest followed the rest of her life, playing saxophone and the piano. She had a great voice and loved to sing. She was known to take any recipe and make it yummy and her favorites were chow mein, pinwheel cookies and batch after batch of fudge. No one in need ever missed a meal. In 1993 Thelma married Clint Mooberry at Immaculate Conception Catholic Church. They loved to travel, have fun and play cards.  He preceded her in death in 1995. Thelma was a member of Immaculate Conception Catholic Church and the Citizens Heritage Club.

Thelma was preceded in death by her parents, one brother and one sister along with their spouses.