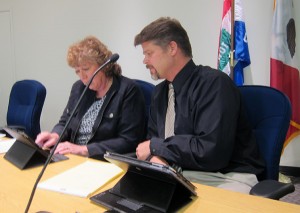 MASON CITY – As if the issues on the table at last night’s city council meeting we’re complicated enough, the council faced its share of technical issues during its meeting as well.

NIT readers have been complaining since last night that there was no sound on the Mediacom-televised meeting.

“There is absolutely no audio coming through on channel 4,” one NIT reader said via text message as the meeting was in progress.  “What a mess.”

Another called our office and said there “is no sound.  What the hell is going on over there?”

Then, as Mercy COO Diane Fischels prepared to speak on the important Mercy expansion project, a video she planned to show to the council and audience would not play on the viewing screen.

“We see it on our monitor,” City Administrator Brent Trout said, “but we do not see it on the screen.”

“Can you wing it?” Mayor Eric  Bookmeyer asked.

Adding to the frustrations, it was noticeable during the meeting that some microphones in front of council members again were not working.  This is typical at most of the Mason City Council meetings.

Topping things off, the council, for the first time, brought their new iPads to the council meeting.  The iPads replaced the clunky 3-ring binders that contained hard copies of the council packets, typically hundreds of pages long.  The iPads have electronic versions of the packets in them and council members can write notes in a program on the iPads.  There is no internet connection for the iPads during the meeting, council members said.

John Lee and Janet Solberg said before the meeting started that they had just recently gotten the iPads and were in the process of discovering all they are capable of.

During the meeting, council members could be seen flicking at the screens and browsing the packet information, moving from page to page.