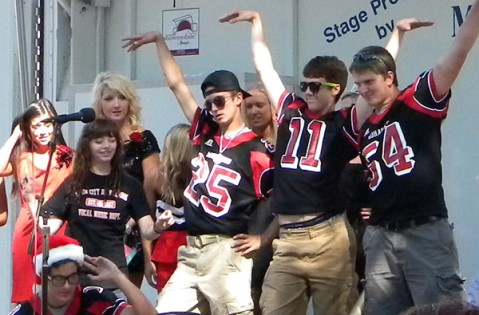 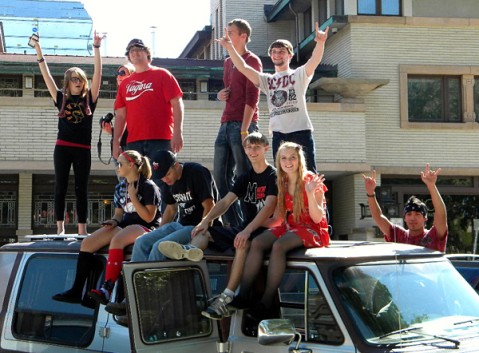 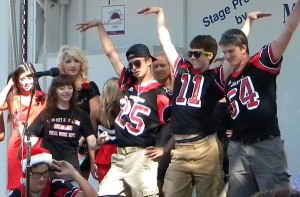 MASON CITY – The Mason City Mohawks celebrated Homecoming this past week, with the theme “The Mohawk Games: Goin’ for Gold.”

Some of the activities the students were involved in were: float decorating; a powder puff football game; dress-up themes like, Follow your Dreams, Team America, Represent you Ring, Gear-up for Glory and Red and Black Day; pep rallies, the coronation, the parade and the homecoming football game against the Fort Dodge Dodgers.

The Homecoming King and Queen candidates were selected by the student body and they voted and announced Friday that Macke Rodamaker would be their Queen and Sahan Jayawardena would be their King. 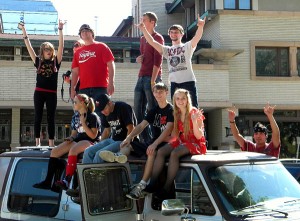 Mohawks fans and students celebrate homecoming 2012 as only they can.

After the Parade, which ran from the High School up to Central Park, a pep rally for the students and the public was held. The cheerleaders and football players put on a show to get Mason City supporters and the alumni in the Mohawk Spirit and pepped-up for the upcoming homecoming football game.

The Mohawks couldn’t hold off the Dodgers, losing the game and the gold, 28-17.

Saturday, the students will be decorating the High School cafeteria for the Homecoming Dance that starts at 8:00 pm. The Court Dance will be at 10:00 pm and the dance will end at 11:00 pm.

Just up the road, the Clear Lake Lions were able to celebrate a homecoming game victory over Waverly-Shell Rock with the score of 42-0.

Hannah Bartlett and Paul Raner were announce Queen and King of the 2012 Homecoming of Clear Lake.