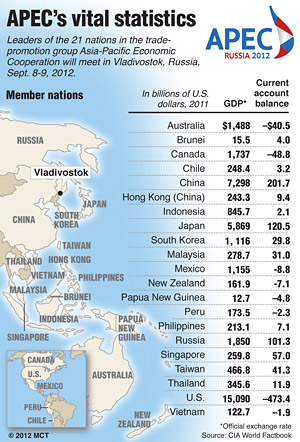 MOSCOW — The world economy’s center of gravity is shifting away from Europe and the United States towards Asia Pacific countries such as China and Russia, President Vladimir Putin said Friday.

“The global economic landscape is changing even as we speak, it is a fact of life,” the Russian leader said in opening remarks at the annual Asia-Pacific Economic Cooperation forum in the Russian Pacific port city of Vladivostok.

“The world is moving into a new economic and technological era … and it is up to us gathered here to meet these changes intelligently and pragmatically,” he said.

“We want to create a regional economic engine,” he said. “Russia will be part of that.”

The summit is scheduled to run through Saturday, with more than 750 senior corporate executives on hand, organizers said.

The most senior U.S. official present is Secretary of State Hillary Rodham Clinton, who was expected to have a “brief conversation” with Putin, presidential spokesman Dmitry Peskov said.

Clinton and Putin were likely to discuss the situation in Syria, Peskov said. Clinton was planning to make a speech at the summit on Saturday, Russian media reported.

Forum discussions throughout the two-day summit were to focus on improving access to water and food, and regional economic integration.

The Kremlin has said the forum will be an important step in Russian efforts to develop its distant Far Eastern provinces and the regional centee Vladivostok, which is 4,000 miles east of the capital Moscow.

Preparations for the summit reportedly costing more than $20 billion have included the construction of a five-star convention complex on an island in Vladivostok’s harbor, and the erection of a suspension bridge connecting the island from the Russian mainland.

“All of this speaks not just of the attention that the government of Russia is paying to the APEC summit, but of the great potential for development for our two countries,” said Chinese President Hu Jintao.

A massive regional security clamp-down was in place. More than 10,000 police and soldiers, backed up by fighter jets and warships, were on hand in Vladivostok or its surrounding areas on Friday, Russian media reported.