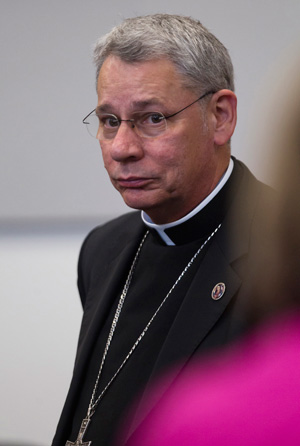 KANSAS CITY, Mo. — Once relatively anonymous in the Catholic world, the Diocese of Kansas City-St. Joseph on Thursday made an unwelcome piece of history.

Finn, 59, was acquitted of one other misdemeanor count of failing to report. And with Finn’s conviction, Jackson County prosecutors dismissed two similar counts that had been pending against the diocese.

The verdicts came after a short, non-jury trial in Jackson County Circuit Court. Judge John Torrence immediately sentenced Finn to two years of probation then suspended the sentencing. If the Finn finishes the probation without incident and completes nine steps as part of his sentence, the bishop’s criminal record will be expunged.

Finn had faced a maximum penalty of a year in jail and a $1,000 fine on each charge. The diocese had faced a fine of up to $5,000 on each of its two counts if convicted.

Before hearing his sentence, Finn told the judge, “I truly regret and am sorry for the hurt these events caused.”

He also said, “The protection of children is paramount, and sexual abuse of any kind will not be tolerated.”

Because of the nature of the suspended sentence, Finn cannot appeal his conviction, said J.R. Hobbs, who represented the bishop at the trial.

The charges stemmed from the church’s handling of the Rev. Shawn Ratigan, on whose laptop a diocesan vendor found hundreds of lewd photos of young girls in December 2010.

Finn’s second-in-command at the diocese, Monsignor Robert Murphy, did not report the photographs to police for five months.

In announcing his verdicts, Torrence said he acquitted Finn of the failure to report count that covered Dec. 17, 2010, to Feb. 10, 2011, saying that prosecutors had not met their burden of proof.

He convicted Finn of the count covering Feb. 11 through May 18. On Feb. 10, 2011, Finn sent Ratigan a letter limiting his exposure to children, computers and cameras. That letter suggested that the bishop clearly was aware of his priest’s threat to children, prosecutors argued.

Finn is the first Catholic bishop in the country, and is believed to be one of only two bishops in the world, convicted of failing to report suspected child abuse. The other case happened in France in 2001, when Bishop Pierre Pican was convicted for failing to report a priest who sexually abused 11 boys between 1989 and 1996.