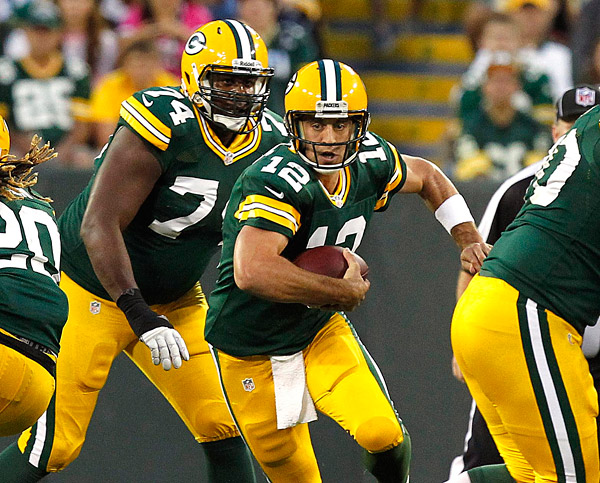 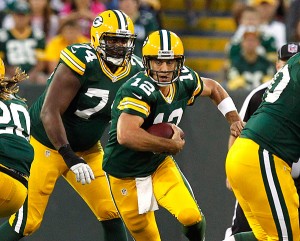 GREEN BAY, Wis. — Success in this distasteful form of pro football known as preseason should be measured in one line item, and one line item only.

Did any starters get hurt?

(PHOTO: Green Bay Packers quarterback Aaron Rodgers (12) picks up yardage on third down in the first quarter against the Cleveland Browns during the NFL preseason game at Lambeau Field on Thursday, August 16, 2012, in Green Bay Wisconsin.)

A week ago, the Green Bay Packers’ loss of ferocious linebacker Desmond Bishop with a serious hamstring injury overshadowed anything else that may or may not have happened against the San Diego Chargers.

The Packers were successful Thursday night at Lambeau Field for no other reason than none of their big guns went down.

“Right, but we’ve still got to get ready to play,” general manager Ted Thompson said after a 35-10 loss to the Cleveland Browns in the 63rd Upper Midwest Shrine Game.

“We’ve got a ways to go. All of it, you add up. It’s all part of the evaluation process. I don’t think you can get too whacked out on a preseason game when you’re scoring a bunch or you’re not.”

Green Bay scratched 18 players before the game started, including 17 because of injury and new running back Cedric Benson because of prudence. The Packers were without five starters, including wide receiver Greg Jennings and tight end Jermichael Finley for a second straight game.

The Browns (2-0) had 15 of their 90 players not in uniform, including three starters on offense and five on defense.

It was just the second time in coach Mike McCarthy’s seven seasons that the Packers started an exhibition season with a 0-2 record. The first was 2008, when they finished 6-10.

On offense, it was all downhill after Randall Cobb fumbled away a short reception at the Cleveland 34. Throwing on almost every down, Aaron Rodgers had led the Packers to three straight first downs on a second drive after a 20-yard touchdown pass to Jordy Nelson on the first series.

Cobb made a nice move to elude cornerback Sheldon Brown in front of the Packers’ bench, but Brown knocked the ball loose from behind and defensive end Emmanuel Stephens recovered in mid-air.

It was the third turnover by the No. 1 offense in six possessions.

“We don’t like that,” said Thompson. “The guy just pulled it out. Caught him in a spin.”

The crowd of 68,201 was in full throat despite early rainfall after Charles Woodson stripped running back Montario Hardesty on the first play from scrimmage and Casey Hayward recovered at the Cleveland 23.

On first down, Rodgers had Nelson wide open in the corner behind cornerback Joe Haden on a throw he probably completes eight or nine times out of 10.

This time, the pass was badly overthrown.

Two plays later, Haden had far better coverage on Nelson as he zipped down the sideline in the same right corner. In tacit acknowledgment just how dominant Nelson can be in the red zone, Rodgers decided to take a shot.

Nelson leaped for the ball over Haden just as the former first-round draft choice from Florida turned back. Haden contested possession and had a hand on the ball. But Nelson strong-armed the ball away from him and crashed into the end zone for the score.

“Very good catch, very good throw,” Thompson said. “It’s not fair, really. Defensively, you can’t do it any better than that. It’s a tough play because the DB’s got his back turned and all that. It was a heck of a play.”

Rodgers overthrew Nelson once more on a fade against Brown before scrambling for 21 yards. Then Haden made a sharp deflection of a second-down pass to James Jones.

When McCarthy went for it on fourth and 2 from the Green Bay 45, cornerback Trevin Wade’s close coverage against Donald Driver produced another incompletion.

“We’re putting these guys in a lot of different spots,” Thompson said. “Mike does that intentionally. Going for it on fourth down early in the game. That was a chance to put our first offense, who he wanted to take off the field, in a tough spot and see if they could execute.”

In San Diego, the No. 1 offense ran 14 plays for 32 yards, two first downs, two turnovers and a punt.

Against Cleveland, the starters managed 99 yards and five first downs in 17 snaps. The improvement was noticeable, but nothing like the Packers expect.

“I think we have a chance to be pretty good,” Thompson said, referring to the offense. “We’re not there yet. (Rodgers) hasn’t been out there a whole lot.”

One week after his desultory first half in San Diego, Graham Harrell fared no better with one first down in five possessions. He played deep into the fourth quarter, finally getting the backups moving at a time when the bleachers were about half empty because of an early-to-bolt crowd that had seen enough.

Thompson was asked if he had confidence in Harrell if Rodgers should go down.

Pat Shurmur, the Browns’ second-year coach, played rookie quarterback Brandon Weeden and his starting offense for the entire first half.

Packers defensive coordinator Dom Capers substituted right outside linebacker Dezman Moses for Clay Matthews and strong safety Jerron McMillian for Woodson early, then lifted his other regulars at the 9-minute mark of the second quarter.

The Browns, who scored a mere 20 touchdowns on offense in 2011, controlled the flow as Hardesty carried 12 times for 45 yards. Weeden, the 28-year-old former baseball player selected with the 22nd pick in the first round, posted a passer rating of 76.7 and didn’t turn the ball over.

“They ran the ball well,” said Thompson. “He (Weeden) has a nice arm. Seems to have good command. They like him.”