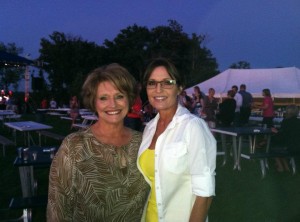 Sarah Palin in Iowa with Iowa Rep. Linda Upmeyer in 2012

SEATTLE, May 1 (UPI) — Sarah Palin’s supporters are urged to contribute money toward recruiting her to run for the U.S. Senate, the Tea Party Leadership Fund said.

“We know that, with Sarah in the Senate, conservatives across America can rest a little easier at night knowing she’s at the watch,” an email from Todd Cefratti of the Leadership Fund, sent this week to supporters, read in part.

She would run against incumbent Mark Begich, D-Alaska, the Los Angeles Times noted.

Palin abandoned the Alaska governorship in 2009 in the middle of her first term. She ran as the Republican vice presidential candidate in 2008.

“I don’t see Governor Palin as a likely opponent [of Begich],” said Anchorage pollster Matt Larkin, whose firm worked for Palin’s gubernatorial campaign. “She doesn’t have the popularity she once had in the state of Alaska. It’s fallen off significantly.”