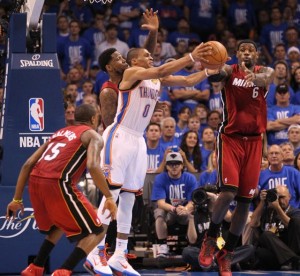 OKLAHOMA CITY — Eventually, it all caught up to the Miami Heat.

The relentless youth of the Oklahoma City Thunder that wasn’t going to allow an early 13- point deficit to get them down.

The fool’s gold of early outside Heat success while the Thunder were building inside dominance.

(PHOTO: The Miami Heat’s Udonis Haslem and LeBron James, right, defend against the Oklahoma City Thunder’s Russell Westbrook in the third period in Game 1 of the NBA Finals at the Chesapeake Energy Arena in Oklahoma City, Oklahoma, on Tuesday, June 12, 2012. Oklahoma City won, 105-94.)

The inability of Dwyane Wade to step up from early struggles the way Thunder guard Russell Westbrook did in the second quarter.

And, just like that, there was a 105-94 loss Tuesday night at Chesapeake Energy Arena and a 1-0 deficit in these best-of-seven NBA Finals.

Forward Kevin Durant led the Thunder with 36 points, offsetting a career-Finals-high 30 points from Heat forward LeBron James. But while Thunder guard Russell Westbrook was able to step up with 27 points, Heat guard Dwyane Wade was limited to 19.

With the victory, the Thunder improved to 9-0 at home this postseason, with the Heat falling to 4-4 on the road in these playoffs.

Game 2 is Thursday on the Thunder’s homecourt before the only playoff round played on a 2-3-2 basis moves to AmericanAirlines Arena on Sunday night for the start of three games on the Heat’s court.

This was the 11th meeting between James and Thunder, with James 7-2 coming in, all in the regular season.

But in the one that mattered most, their first career playoff meeting, it was advantage Durant, who shot 6 of 7 on 3-pointers.

For a while, the Heat hardly had the look of a team coming off an emotional Game 7 victory Saturday over the Boston Celtics. Instead, it was Shane Battier hitting 3-pointers, Udonis Haslem hoarding rebounds and James seemingly on the way to something bigger.

But, at the finish, the Thunder did to the Heat what they did to the San Antonio Spurs in the previous round, using a second half as their takeoff point, youthful energy in abundance.

Despite the loss, James joined Michael Jordan and Shaquille O’Neal as the only players to score 30 or more in four consecutive series-opening games, having done it against the New York Knicks, Indiana Pacers and Boston Celtics.

With Westbrook giving their Thunder their first lead of the night on their final possession of the third quarter, the Thunder used a 9-0 run that bridged the third and fourth quarters to pull away.

Even with Battier scoring a 2012 postseason high 17 points, the Heat didn’t have enough.

With the Heat growing stagnant and the Thunder continuing to push the pace, Oklahoma City recovered from a 54-47 halftime deficit to tie it 60-60 on a Thabo Sefolosha layup with 6:44 to play in the third period, yet to take a lead to that point. The Heat opened the second half 1 of 5 from the field.

The Thunder then took their first lead of the night on a Westbrook drive that he turned into a 3-point play and a 74-73 Oklahoma City lead with 16.4 seconds to play in the third period, with the quarter ending with that score.

The Heat could not have asked for a much better start, certainly not Battier, who got to do the halftime ABC interview after scoring 13 first-half points, which matched his previous 2012 postseason high.

With James adding 14 points over the first two quarters, the Heat went into the intermission up 54-47.

The Heat pushed their lead to 13 in the second quarter, after leading 29-22 at the end of the first quarter.

While it was an efficient first half for the Heat that included 6-of-10 3-point shooting and only four turnovers, the Thunder were able to stay close by scoring 26 points in the paint in the first half and outscoring the Heat 13-4 in transition over the first 24 minutes.

That pattern would continue in the second half.

The Heat largely settled for outside shots early, with Battier making his first three 3-point attempts, Mario Chalmers making two in the first half and Chris Bosh nailing one.

Bosh again played off the bench, in his fourth game back after missing three weeks with a lower-abdominal strain.

The Heat clearly flustered the Thunder early with a series of cross-matches that had James defending center Kendrick Perkins, Battier guarding Durant and Wade on Westbrook.

As has been the case in previous rounds, Heat coach Erik Spoelstra delayed announcing his lineup decision until just before tip-off, declining to tip his hand after the morning shootaround or during his league-mandated pregame media session.

He said it was not a matter of hiding strategy from the Thunder, but rather to keep his players from being asked about the lineup during the pregame media availability.

“I’d be willing to tell Oklahoma City,” Spoelstra said. “I don’t think it’s a competitive advantage. I just . . . one of the few times that hopefully we can control a little bit of the noise out there, we don’t have to get into the debate about the pluses or minuses about it before the game. The guys can just focus in, get into their iPads and focus on the game.”

Wade entered averaging 30.6 points in his previous 12 Finals games, highest among active players, but this time he looked more like the player who so struggled in the previous round against the Celtics.

The Heat entered 6-1 in Game 1 of series over the past two postseasons, outscoring the opposition by an average of 8.6 points.