Twins keep Phillies on the skids, 11-7 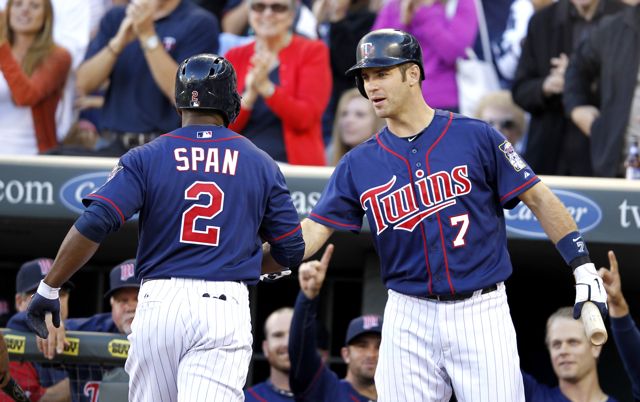 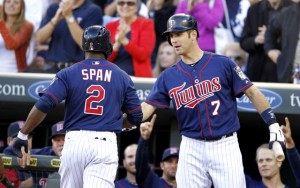 By Matt Gelb, The Philadelphia Inquirer  –

MINNEAPOLIS — Manager Charlie Manuel and his optimistic Phillies players keep speaking about rock bottom as if it has already happened in this charmless 2012 season. A week ago, Manuel said: “Hopefully that was tonight,” and his team has won one game since. The players talk about grinding and doing the little things and overcoming bad luck.

(PHOTO: The Minnesota Twins’ Denard Span (2) celebrates his home run in the first inning with teammate Joe Mauer against the Philadelphia Phillies at Target Field on Tuesday, June 12, 2012, in Minneapolis, Minnesota.)

They pulled up their red socks in unity before the latest bludgeoning, an 11-7 defeat Tuesday to the last-place Twins. They wore red T-shirts before the game with the words “Fake Tough,” a not-so-thinly veiled shot at Washington Nationals general manager Mike Rizzo, who presides over a team on pace for 100 victories.

“What can I say? It’s hard for us to put together a solid game,” Manuel said after the latest loss.

Times are desperate. The Phillies are 91/2 games back of first place, further back than they’ve been since 2006, before they started their glorious postseason run. They are five games under .500 this late into a season for the first time since Aug. 1, 2006. Heck, even the Phanatic was sued Tuesday.

The Phillies have lost nine of their last 10 and have 99 games to save a sinking season. It is increasingly obvious that their current roster is ill-suited to do such a thing. Reinforcements are weeks away, and while Chase Utley, Ryan Howard, and Roy Halladay would be the best deadline acquisitions for any team in baseball, they could come too late.

The days of Four Aces are long forgotten. A pitching staff that entered Tuesday with the 12th-best ERA in baseball allowed a run to Minnesota in every inning but two and a season-high 17 hits. Starter Kyle Kendrick was shelled for six runs in four innings, and three relievers who have worn IronPigs uniforms in 2012 surrendered five more runs.

“There’s going to be some growing pains there,” Manuel said of the bullpen. “But our guys have talent. But it’s going to take some time to get them experience.”

This should have been a night for good vibes to flow. The hapless Twins started Nick Blackburn, whose 7.75 ERA was higher than any other pitcher in baseball with at least eight starts. The Phillies scored four times against him in five innings. It was hardly enough.

Kendrick dug a five-run hole, lasting four miserable innings and 77 pitches. The largest lead the Phillies have erased for a comeback victory in 2012 is two measly runs. The second ball Kendrick threw Tuesday night was launched deep to right by Denard Span for a solo blast and harbinger of doom.

Trevor Plouffe took Kendrick deep in the second for a three-run homer, making it the first time this season Kendrick had allowed more than one home run in a start. In fact, Kendrick hadn’t surrendered one in his previous three starts.

Since his seven-hit shutout of St. Louis on May 26, Kendrick has morphed into a pumpkin. He’s allowed 13 runs in 15 innings.

His most demoralizing act Tuesday may have been allowing a run in the fourth immediately after his teammates rallied to close the gap to 5-4. Span walked on six pitches and scored on a Joe Mauer double smashed off the center-field wall.

Hunter Pence made things doubly worse in the fifth, when a Ryan Doumit single to right easily bounced past his glove and became a two-base error. That runner scored. So did another when Jamey Carroll doubled to left. That one should not have counted because Plouffe missed third base on his way home. But second base umpire Manny Gonzalez did not see the gaffe, and it was meaningless once the Phillies’ minor-league relief arms tossed gasoline on a season-long inferno.

Talking in dire tones about a season only 63 games old is hazardous, but with Washington soaring atop the division, it’s not preposterous. The Phillies have spent more on their roster than any National League team, and it has bought only mediocrity to this point.

Sometimes, Manuel will admit his deficiencies. When guys like Trevor Plouffe, Brian Dozier, and Jamey Carroll make life miserable, it says enough. The pressing question for these middling Phillies is, have they even contemplated how deep rock bottom could be?