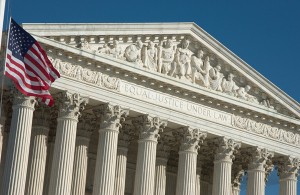 WASHINGTON — The Supreme Court signaled Monday it will not review claims from the remaining Guantanamo detainees, leaving their fate in the hands of the Obama administration.

The justices turned down appeals from seven detainees, all of whom had lost before judges in Washington. They argued they had been denied the “meaningful opportunity” for freedom that the high court promised four years ago.

Meanwhile, the lone American citizen who was arrested in this country and held by the military as an “enemy combatant” also had his case turned away.

Jose Padilla and his mother Estela Lebron sued former Defense Secretary Donald Rumsfeld and other top officials for a symbolic $1 in damages. They contended it was unconstitutional for the military to imprison a U.S. citizen and torture him for information.

But the courts have consistently blocked lawsuits against U.S. officials over their anti-terrorism policies, and Padilla’s suit was tossed out by two lower courts. The justices dismissed the case, Lebron v. Rumsfeld, without a comment.

Ben Wizner, an American Civil Liberties Union lawyer, said the decision “leaves in place a blank check for government officials to commit any abuse in the name of national security, even the brutal torture of an American citizen in an American prison. To date, not a single victim of the Bush administration’s torture regime has received his day in court.”

Padilla was arrested at Chicago’s O’Hare Airport in 2002 after a flight from Pakistan. He was held for more than three years by the U.S. military. But the administration switched course in 2005 and charged him with aiding terrorists. He was convicted by a jury in Florida and is serving a 17-year prison term in Colorado.

Lawyers for the Guantanamo detainees say the conservative U.S. appeals court in Washington had made it practically impossible for their clients to win an appeal.

Until Monday, they held out hope the high court would intervene.

Jonathan Hafetz, a law professor at Seton Hall University in New Jersey, said the high court “has effectively abandoned its commitment to ensuring that individuals held in long-term detention at Guantanamo obtain meaningful review of their imprisonment.”

Four years ago this month, the detainees’ lawyers celebrated what they saw as a historic victory in the Supreme Court. The justices, in a 5-4 decision, ruled the Constitution guaranteed the detainees the right to habeas corpus and to seek their freedom before a federal judge. But that decision did not spell out the rules for deciding such claims.

Since then, the U.S. court of appeals in Washington set a high bar for detainees. Its judges ruled, for example, the military’s field reports describing the circumstances of a detainee’s capture should be presumed as accurate.

Lawyers for Adnan Latif said he had gone to Pakistan for medical treatment. But officers who captured him said he had been a fighter for the Taliban. A federal judge ruled for Latif and said he deserved to be released, but the administration appealed and won a reversal in the court of appeals.

His lawyers appealed to the Supreme Court, but his case, Latif v. Obama, was one of the seven appeals turned down on Monday.

The Obama administration said it has released several dozen detainees since taking office, but whenever it has objected to a judge’s decision, it has won in the U.S. court of appeals. So far, no detainee has been set free based solely on a judge’s decision.