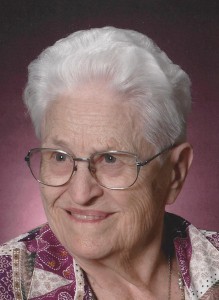 Funeral services will be held at 1:30 pm Thursday, June 14, 2012 at St. John Evangelical Lutheran Church. Officiating will be the Rev. Dennis Niezwaag, senior pastor. Visitation will be from 4:00 until 7:00 pm, Wednesday at Fullerton Hage Funeral Home 401 Blunt, Charles City and one hour prior to services Thursday at the church. Interment will be in the Mount Carroll Rowley Hill Cemetery, Ionia. Condolences may be shared with the family at www.Fullertonfh.com.

Laurnetta was born on January 21, 1918 in Bainville, Montana to Clarence Hobert and Emma Charlotte Dreyer. The family later moved to Charles City where she graduated from Charles City High School in 1936.  She married Fred VanHeuvelen on September 18, 1961 at St John Evangelical Lutheran Church.

Laurnetta spend the vast majority of her life in the Charles City area where she was well known as an excellent cook.  She was a Veterinarian office helper for Dr. Albert Eliason in Plainfield for six years following the death of Fred in 1966. She later cooked for 10 years in the restaurant in the Mall in Charles City before retiring in 1982.  Not to rest her cooking skills she cooked at the Moose Lodge for many years after retiring.  She was actively involved in the Women of the Moose starting in 1968 along with being an active quilter with the First Congregational Church Quilters and also with the St. John Lutheran Quilters.  She was also active with the WELCA- Rachael Circle at St. John’s.  Her favorite items to cook were pies.

Her parents, husband Fred on February 17, 1966, brothers Emil and Marvin Hobert and sister Ethel Lessin, and niece Janice Lessin preceded her in death.