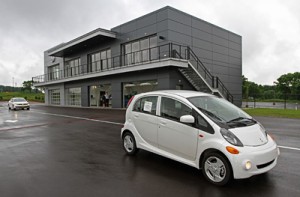 MINNEAPOLIS — One of the world’s top leasing companies is betting that corporations with fleets of cars and trucks increasingly will want them to be powered by electricity and other alternatives to fossil fuels.

That bet will be partly tested at a half-mile track in Minnesota.

(PHOTO: A 2012 Mitsubishi i-MiEV electric car pulled away on a test drive at the new national showroom at the GE Capital Fleet Services building in Eden Prairie, Minnesota on May 24, 2012.)

Industry officials said GE’s “Vehicle Innovation Center,” which opened this week, is the first of its kind — a place where fleet managers from around the country will be invited to test drive everything from a small plug-in electric car to a semitrailer truck powered by liquefied natural gas.

The center is the vision of Debora Frodl, GE’s global alternative fuels leader, who says commercial vehicle fleets are emerging as early adopters of hybrid electrics and other alternative-power vehicles.

“We are seeing it,” Frodl said of the corporate shift to alternative-fuel vehicles. “It’s real.”

GE’s fleet services business already has 1.4 million vehicles under lease, and helps clients by advising them on cars and trucks that best suit their needs. Then GE acquires and finances the vehicles and, finally, tracks how well they perform.

“Many consumers look only at the up-front cost,” she said. “Fleet managers look at the total cost of ownership.”

GE, which also makes plug-in electric charging stations, has said it plans to acquire 25,000 electric vehicles for its corporate fleet by 2015. Some employees of GE fleet leasing in Eden Prairie already drive gas-electric cars that are recharged at plug-in stations in front of the corporate offices.

Though the company didn’t disclose the cost of the Vehicle Innovation Center, a city planner said its value was assessed at $949,000. GE also upgraded its adjacent headquarters building with displays about GE innovations.

“That is a major shift away from what it used to be,” said Russo.

Russo said government vehicle fleets have been moving to alternative-fuel vehicles for some time, often because of mandates. In the past two years, more corporations have turned to green vehicles, in part to reduce their carbon footprints and enhance their reputation as green companies, he said.

“The greening of a company is certainly attractive to the early adopters,” said Kevin See, lead analyst for electric vehicles at Lux Research in Boston.

Some companies, like FedEx and Coca-Cola, can save on electric vehicles because they can reduce or eliminate engine idling during delivery stops, he said. “There are gains to be had,” See said.

Lisa Jerram, a senior researcher in Washington, D.C., for Pike Research, which tracks clean technology, said companies face a tough decision when weighing the economics of switching to alternative-fuel vehicles. It often means budgeting more to acquire vehicles while trying to project the future price of gasoline, she said.

“There is no question, there is a lot of interest,” said Jerram, who recently wrote a report on alternative-fuel cars for fleet operators.

Her report concluded that a mid-size battery-electric car offers the lowest cost of ownership if driven 120,000 miles. Much of the $35,000 total plug-in vehicle cost was the initial purchase, she found.

Experts said fleet managers also must consider the cost of installing charging and fueling stations, as well as their employees’ driving patterns and distances.

The array of vehicle choices is also growing. At the invitation-only grand opening of GE’s Vehicle Innovation Center, officials expected to have 23 alternative-fuel vehicles on hand.

They include lesser-known vehicles like the Coda sedan, the Navistar Estar truck and the BMW-1 Active E sports car. Also on hand: a Kenworth compressed natural gas truck, as well as hydrogen fuel-cell vehicles from GM and Mercedes.

Frodl said not all the vehicles will remain at the center, but any model can be brought in if a client wants to test it. The center won’t be open to the public, she said, but GE expects groups of corporate clients to visit each week.