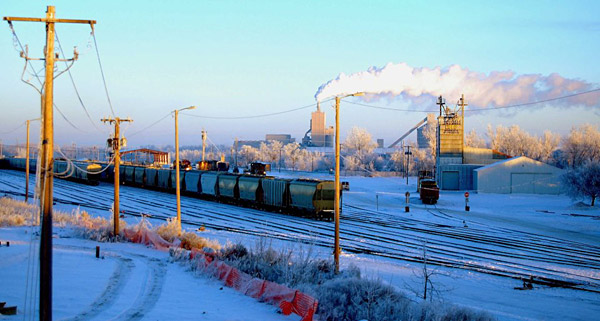 WASHNGTON, D.C. - A calamitous railroad worker strike is now looming for next month, and the results of such a work stoppage would be devastating to the economy.

WASHNGTON, D.C. – A calamitous railroad worker strike is now looming for next month, and the results of such a work stoppage would be devastating to the economy.

The latest on the potential rail strike, via the Iowa Worker’s Almanac:

All of the unionized rail workers for the largest Class I railroads have now weighed in on the tentative agreement, and the results suggest a North America-wide rail strike is on the horizon early next month.

After two big votes this weekend, a total of four of the 12 unions bargaining with the railroads, or nearly 60,000 workers—more than half of the 115,000 total unionized workforce—rejected the agreement.

Those unions now enter a cooling-off period where they can go back to the bargaining table. But if no agreement is reached, workers could elect to strike, or railroads could lock workers out, as soon as Dec. 9. Unlike strikes in other industries, Congress could call an end to this one if they so choose. But union groups are urging them to hold out for workers’ sake.

“Thanks to deep cuts in the workforce exacerbated by the widespread adoption of ‘Precision Scheduled Railroading’ in recent years, inadequate staffing levels are at the root of this rank-and-file rebellion,” said Railroad Workers United Co-Chair Ross Grooters. “Railroad workers are not just fighting for quality of life; we’re fighting for the future of freight railroads.”

A railroad strike of roughly 115,000 workers would cripple the economy and could cost a billion dollars or more. Negotiations are apparently still underway to avert this catastrophe and satisfy workers’ demands, among them, paid sick days.