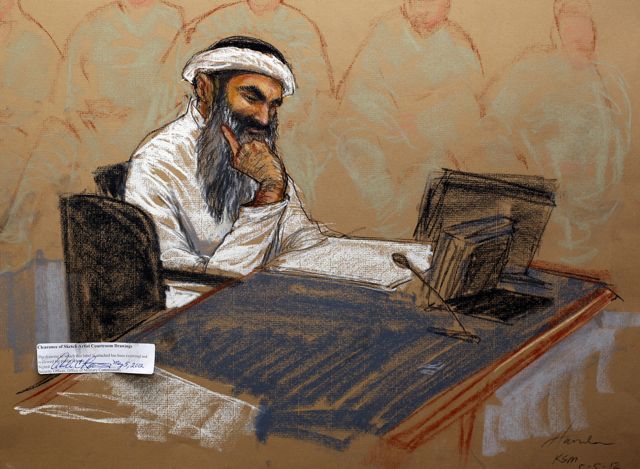 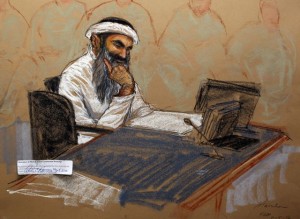 GUANTANAMO BAY NAVY BASE, Cuba — Accused 9/11 mastermind Khalid Sheik Mohammed and his alleged co-conspirators put on a defiant show at their war court arraignment Saturday, refusing to listen to the proceedings through a headset, then refusing to answer the military judge’s questions on whether they’d accepted their Pentagon-paid defense counsel.

At no time did they enter a plea. One accused terrorist, alleged 9/11 trainer Walid bin Attash, was carried into court at about 9 a.m. strapped into a restraint chair. The judge, Army Col. James Pohl, said guards chose to put the captive in restraint because of his behavior outside the court. He did not specify.

At another point, Ramzi bin al Shibh, the alleged organizer of an al-Qaida cell in Hamburg, Germany, got up from his defendant’s chair and began to pray. He stood, arms crossed on his chest, then at one point got on his knees.

The guards inside the maximum security court compound did nothing to stop him.

The five 9/11 accused allegedly trained, advised and financed the 19 hijackers who commandeered airliners on Sept. 11, 2001, and then crashed them into the World Trade Center, Pentagon and a Pennsylvania field, killing 2,976 people. All could get the death penalty, if convicted.

Saturday’s rare war court session was the first appearance of the five men since Jan. 21, 2009, a day after the inauguration of President Barack Obama.

Mohammed was attired in a turban and what appeared to be a white gown. His massive beard looked reddish, apparently from henna.

Bin al Shibh blurted out at one point that the prison camp leadership was just like Moammar Gadhafi, the since-slain Libyan dictator.

When the judge tried to hush Bin al Shibh, explaining the accused would be given a chance to speak later, the Yemeni replied: “Maybe they are going to kill us and say that we are committing suicide.”

Defense lawyers said, alternately, that the men were protesting prison camp interference in the attorney-client relationship, something that happened that morning involving Bin Attash’s prosthetic leg during his transfer from his cell to the war court, and their treatment in years of CIA custody prior to their September 2006 arrival at Guantánamo.

Borman stunned spectators by turning up at the maximum-security compound in a black abaya, cloaking her from head to toe — covering her hair, leaving only her face showing.

Pohl questioned Bin Attash’s military attorney, Air Force Capt. Michael Schwartz, about whether Bin Attash would sit peacefully if the restraints were removed. Midway through the morning, the judge instructed him to be released. He sat for the rest of the morning in an ordinary court chair, but didn’t appear to be following the proceedings.

At issue in the hearing was whether the accused 9/11 conspirators would accept their Pentagon-paid defense counsel, a key preliminary step to holding an arraignment. The defense lawyers sought, first, to argue motions at the court alleging inadequate defense resources, prison camp interference in the attorney-client relationship and restrictive conditions imposed on their legal duties.

Pohl would have none of it. He insisted that the issue of appointment of counsel come first.

Then, one by one, the judge read a script to each of the accused, spelling out each man’s right to a Pentagon-paid legal team. Pohl periodically asked each of the men whether he understood what was being said.

None replied, so he noted over and over again for the record, “accused refuses to answer.”

And, then one by one, the judge unilaterally appointed their Pentagon-paid attorneys to defend them.

With the exception of Bin al Shibh’s outburst, the men adopted looks of disinterest throughout the hearing. During recesses, they spoke animatedly between themselves and their five rows, at times laughing and smiling.

For a while, Mohammed’s nephew leafed through a copy of The Economist. He handed it back to Mustafa al-Hawsawi, sitting in the defendant’s row behind him during a recess. The nephew, a Pakistani, and Hawsawi, a Saudi, are accused in the charge sheets of wiring money to the 9/11 hijackers.