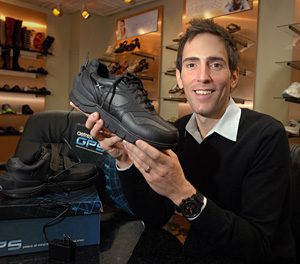 HACKENSACK, N.J. — A Teaneck, N.J., shoe maker has joined with a California technology company to create a shoe that uses GPS technology that records where a wearer walks — and can send alerts to caregivers if someone suffering from Alzheimer’s disease or dementia wanders away and gets lost.

(PHOTO: Evan Schwartz, President of Aetrex, a Teaneck-based shoe manufacturer, shows off a shoe fitted with a GPS device that can monitor a wearer.)

A family in Virginia has been using the shoes for the past month, as part of a trial set up by an elder-care expert, to keep track of an 83-year-old husband and father who scared his wife recently when he wandered away while she was grocery shopping. The man’s son now gets alerts on his cellphone showing his father’s location. “So if I lose him, I can call my son and he tells me where he is,” the man’s wife said.

Aetrex Worldwide Inc. began selling the shoes on its website last month. Aetrex President Evan Schwartz said the company has sold “a few hundred pairs” thus far and that the response from customers has been positive. He said the company also is in discussions with the Department of Veterans Affairs and assisted-living companies about the shoes.

Aetrex spent close to two years developing the GPS footwear with GTX Corp. of Los Angeles. GTX had invented a miniature GPS tracking device and was looking for ways to use that technology. Andrew Carle, an administrator at George Mason University in Virginia who specializes in studying the technology needs of the elderly, approached GTX about creating a tracking shoe for Alzheimer’s patients and helped bring GTX and Aetrex together. Carle also recruited the Virginia man’s family to test the shoes.

“GTX was thinking of using the technology for children,” Carle said. “I contacted them and pointed out the need for something like this for Alzheimer’s,” he said. “We know that 60 percent of people with Alzheimer’s wander and get lost. We know they have extremely high rates of injury and even death if they’re not found within 24 hours,” said Carle, who has become a paid consultant for GTX.

And, Carle said, caregivers also know that other kinds of tracking accessories, such as watches or bracelets, don’t work because the Alzheimer’s patient will remove them. Most Alzheimer’s patients aren’t going to wander off without their shoes, he said.

GTX patented the GPS shoe technology some years ago, but hadn’t found a company that could make the shoes until it began talking to Aetrex. Aetrex, founded in 1946 as an orthotics inserts manufacturer, now also sells shoes, sneakers and orthotics for people with special footwear needs such as diabetics, as well as comfort shoes for the elderly. GTX recently branched into fashionable comfort shoes, such as sandals and women’s boots, as well.

The privately held company says it has more than $60 million in annual sales, and has one retail store, in Englewood, N.J.

In discussions with GTX, “we realized this might be a good fit,” said Schwartz. “You have this company that makes this technology and a company that’s really well-known in the foot health space.”

Aetrex installed the GPS tracking mechanism in a sneaker-style shoe it makes called the Ambulator, which is popular with elderly patients. The GPS shoe comes in men’s and women’s models, and in two colors, white and black, and sells for $299.99. Customers who purchase the shoe also need to pay a monthly fee for the GPS monitoring service. There are two levels of service offered — location alerts every 30 minutes for $34.99, or every 10 minutes for $39.99. Customers also can go online and create, in effect, a virtual fence — a geographic zone around a person’s residence — and get special alerts anytime the shoe wearer leaves that zone.

The battery that powers the shoes needs to be charged periodically, and a charger plugs into the back of the shoe.

Carle said “procedural memory” — habits such as putting on your shoes when you wake up — is the last to fade for Alzheimer’s patients, and that is why a GPS device in a shoe is effective.

He said wandering is a problem, even when a patient is with a spouse or family member all the time, because “it doesn’t take 15 seconds for them to be gone. You can’t have this person follow you everyplace you go. By definition, there’s going to be moments when they’re alone. And they wander,” he said.

Aetrex only makes the shoes in adult sizes, but said there is much interest in similar shoes for children. Right now, Schwartz said, the GPS devices aren’t small enough to fit into a children’s shoe. “Between the antennas, the battery, the chip … it ends up being too bulky to get in there,” he said.