This news story was published on January 1, 2012.
Advertise on NIT • Subscribe to NIT 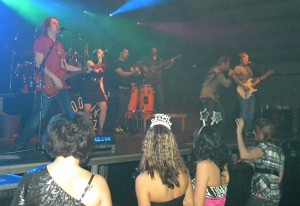 People were out celebrating the beginning of a new year Saturday night in Mason City.

A couple places especially busy were Roller City and the All Seasons Building at the North Iowa Fairgrounds.

The new owners of Roller City, Tyler and MacKenzie Anderson and Thaddeus and Michelle Seydel, hosted a New Year’s Rollerskating Party.  Many families and young people went out to do some skating and enjoy some good times.

Most of us have great memories of going to the roller rink when we were kids.  What a terrific way for the new generation to start building theirs.

Each skater received a glow-in-the-dark stick necklace after they entered the rink. They also signed their names on back of tickets for drawings later in the night.

This is one place in Mason City where parents didn’t have to worry about their kids being exposed to alcohol on New Year’s Eve and for them to have a lot of innocent fun.  The party started at 8:00 p.m. and got over at 12:30 a.m.

Out at the fairgrounds, in the All Seasons Building, Boogie and the YoYo’z put on a great show for those that wanted to hear some music and do a little dancing.  Many were with their special someone to receive their midnight kiss from.  They started at 9:00 p.m. and rocked in the new year.

The Mason City Police Department was out in full force, protecting the people that were out celebrating.  We even got pulled over for a burned out headlight that we didn’t know about. The officers are greatly appreciated.