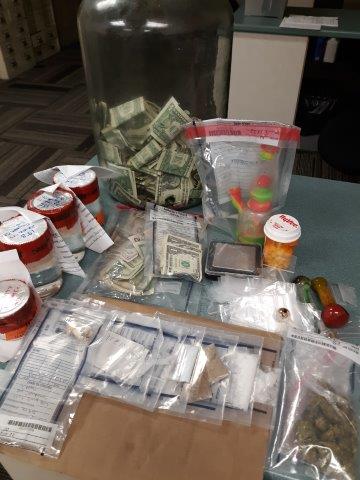 On September 17, 2022, at approximately 9:50 PM, the Fayette County Sheriff’s Office executed a search warrant at 107 7th Ave NW in Oelwein, Iowa. During a search of the residence, illegal substances were found and seized, including methamphetamine, marijuana, pills, and other unidentified substances. A large amount of US currency was also seized which was in close proximity to the illegal substances.

Anthony Alan Marrah, 36 of Oelwein and Jade Lynn Ann Nuerhring, 39 of Oelwein. Nuerhing and Marrah were both charged with Possession of a Controlled Substance 3rd Offense Methamphetamine, Gathering Where Controlled Substances are being Used-Methamphetamine, both D Felonies, and Possession of Drug Paraphernalia, a simple misdemeanor. Marrah was additionally charged with Obstruction.

Euans, Marrah, and Nuerhing were all taken into custody and transported to Fayette County Jail, where they awaited initial appearance.

Sheriff Marty Fisher reported that this is the 3rd Search Warrant the Fayette County Sheriff’s has executed at 107 7th Ave NW since 2021.