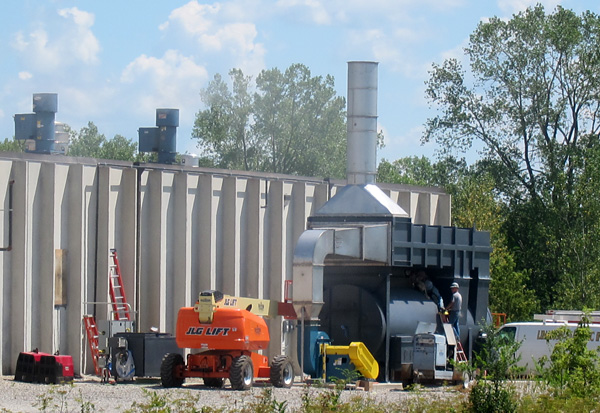 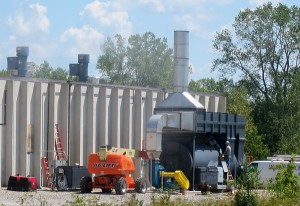 I was notified by neighbors of the South Benjamin Vi-COR plant in Mason City that a thermal oxidizer device has arrived there. The oxidizer was said to have cost hundreds of thousands of dollars.

“The thermal oxidizer has been delivered to VI-COR and is being installed,” a neighbor told NIT. “I drove past there today and saw it standing there, cranes and lots of trucks around the area as well. Hopefully the odor issue will be NON-EXISTENT when the unit is completely installed.”

This is the culmination of a tug-of-war between Mason City residents and Vi-COR that has went on for years.  Vi-COR did not immediately return an email requesting information.

I went by the South Benjamin plant on Tuesday, and there were workers outside the south end of the building.  From a couple hundred yards away, the smell was awful; pungent I would say.  That’s the same smell Mason City has dealt with for years, all over town. You can smell it north, south, east and west, at various hours of the day and night.  Anyone who lives near the Vi-COR plant on South Carolina Ave. knows that smell. Those folks didn’t raise enough of a “stink” to Vi-COR about it, though, so they will go on sniffing that nasty aroma for at least the foreseeable future.

It looks like Vi-COR will meet the city’s “demand” of installing their de-smellifier just in the nick of time, by July 31.  It must be nice for Vi-COR to own a mayor, council and city administrator who will ignore city code and allow you to get away with this for months and months.  Years, really, if you count both plants.

So, I’d like to extend an equally odious thank-you to Vi-COR and its president, Mark Holt, who drives around in that obnoxious, huge, green army jeep with the massive silver rims.

Thanks, Mark, for smelling up my hometown and exposing City Hall’s corruption.