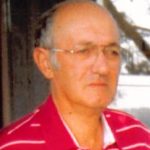 Robert (Bob) Dean Fuller was born March 2, 1929, in Jackson Township, Hardin County, Iowa, to Verne and Gladys (Johnson) Fuller. He graduated from Owasa High School in 1946 where he played basketball and baseball. After attending Iowa State Teachers College, he married Arleen Upton on December 31, 1948. They moved to a farm east of Owasa and lived there fifty years until highway 20 was built, requiring them to relocate.

Robert served in the Iowa National Guard tor 10 years. Robert was very active in his community. He served on the Hardin County Extension Council, the Owasa School Board, and was a Jackson Township Trustee. He was also a Trustee of the Owasa Methodist Church, where he was a member all of his life, having been baptized there.

Bob was on the Board of Pine Lake Housing, and served as a 4-H leader. He was a member of the Kiwanis, Moose Lodge, Pine Lake Wildlife Club, and Iowa Shorthorn Association.

Robert is preceded in death by his wife, Arleen; his parents; and a granddaughter Amy.