CEDAR FALLS – The UNI women’s basketball team was able to get their third conference win in a row against the streaking Southern Illinois Salukis 66-57.

A 30-point first quarter helped the Panthers hang on for a strong defensive win against Southern Illinois on Saturday afternoon. Once UNI gained the lead one minute into the game, they wouldn’t surrender it again over 39 minutes of play. It came close when the Salukis were within one at the end of the third, but a five-point run would help propel the Panthers to another conference win.

“I thought our start was terrific. That’s probably the best quarter we’ve played all year,” said Head Coach Tanya Warren of the win. “I thought our energy was good, I thought our offensive execution was outstanding. And I thought we defended with urgency, we finished plays on the defensive end with rebounding.

The Salukis grabbed the first basket of the game. But a foul on forward Gabby Walker let forward Grace Boffeli tie things up at the line. It’d be back and forth basketball until four minutes in when guard Emerson Green stretched the lead out to four off of two made free throws. UNI would get their lead out to seven with a layup and three-point jump shot both made by guard Kam Finley. Following a media timeout, the Panthers would go on a 10-point run to get a double-digit lead of 17. Southern Illinois would answer with one more basket in the frame as UNI headed into the second leading 30-11.

The second quarter would start almost identical to the first with SIU getting the first points but Boffeli answering back for the Panthers. The back and forth basketball would continue until the Salukis went on an 8-point run over two minutes at the end of the frame to bring UNI’s lead down to single digits. Southern Illinois also had their best quarter in the second, scoring 19 points off of 17 attempts. But the Panthers would hang on defensively thanks to rebounds across the lineup to go into halftime leading 38-30.

It was a slow start to the second half as neither team found the basket in the first 45 seconds. But once the offense got going, both UNI and SIU would make baskets back and forth over two minutes of play. The Salukis would have a brief 5-point run to bring the deficit down to five points. The Panthers would get their lead back up to 6 off a jump shot from guard Karli Rucker. But Southern Illinois would have another scoring stretch making three baskets in under 45 seconds to close the gap to just one point. UNI would find a surge of offense to end the quarter with baskets from Finley, forward Sara McCullough, and a three-point play from guard Maya McDermott.

SIU would start the final quarter with the ball, making their first layup and bringing the Panther lead back down to five. In the first minute of the quarter, a rare double technical foul would be called on Finley and Southern Illinois’ Tyraany Brown. The initial call from the officials was a jump ball but after an official review, it was changed to the double technical. It’d then be over two minutes of missed shots for both teams until Rucker would get fouled on the floor to get two shots at the line in the bonus.

Rucker would again head to the line almost 30 seconds later, making both shots to get UNI’s lead back up to eight points. The Salukis would get their chance at the line with Walker draining both tries. But Rucker would have the answer with a three-point basket from the top of the key to get the lead back out to nine. SIU would go on one last run, scoring four points over two and a half minutes to get within five. But two quick baskets from center Cynthia Wolf and Rucker would put the game away for the Panthers to win 66-57.

Karli Rucker led the offense for a second straight game, scoring 18 points off 23 tries. Also, in double figures for the Panthers was Finley with 11 points on 16 shot attempts. Finley also had a strong defensive outing, grabbing four boards and one block in the win. Rebounds were spread up and down the roster for UNI with forward Bre Gunnels grabbing the most at seven. Boffeli had five boards while Finley and Wolf had four each.

UP NEXT:
The Panthers get to take a bit of a breather over the next few days before heading to Des Moines next week. UNI will take on the Bulldogs at their home court Friday, Jan. 21. Tipoff at the Knapp Center is scheduled for 6 p.m. 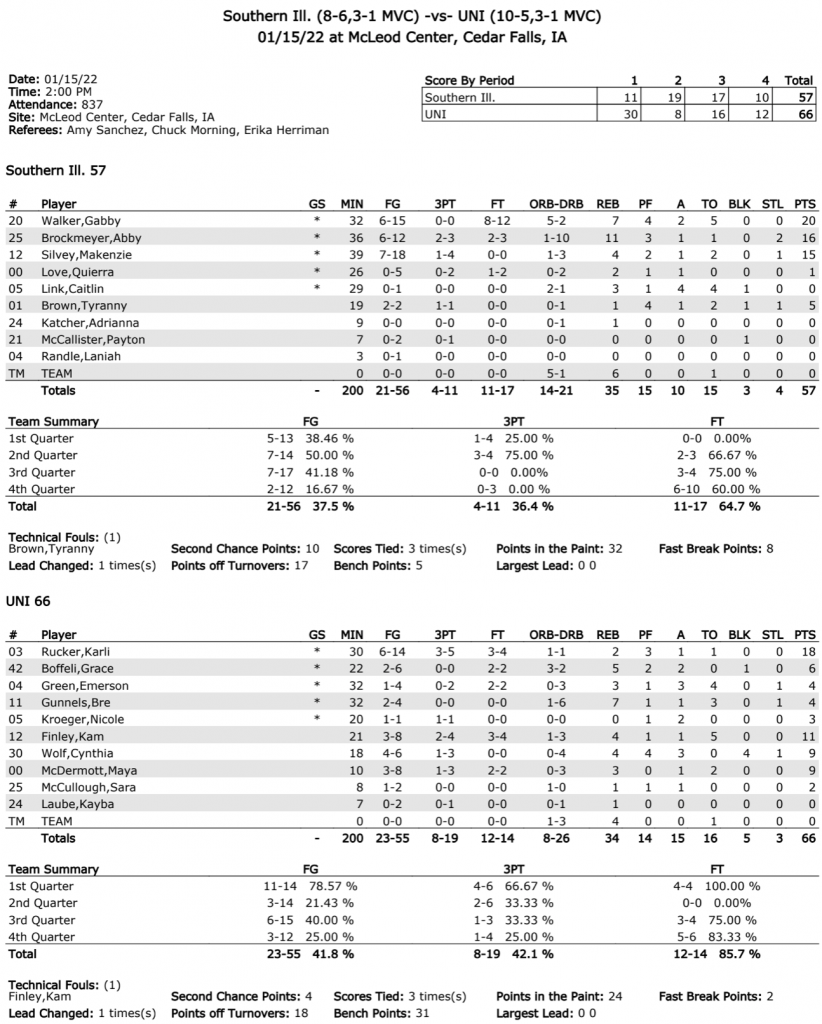