This news story was published on October 7, 2021.
Advertise on NIT • Subscribe to NIT

ESTHERVILLE, IOWA – Two Northern Iowa men face murder charges after an “exhaustive investigation” into the discovery of deceased man on a road over the past weekend.

The Emmet County Sheriff’s Office is releasing additional details in regard to the discovery of a body found on a rural Emmet County roadway last Saturday.

After an exhaustive investigation by the Emmet County Sheriff’s Office, Iowa Division of Criminal Investigation and Estherville Police Department, two search warrants were simultaneously executed in Estherville and Rockwell City, Iowa this week. In Estherville, the “HEAT” (High risk Entry and Arrest Team) was utilized to safely enter and execute the warrants. In Rockwell City, the Iowa Department of Public Safety’s Tactical Team was utilized. After each scene was secured, the locations were searched and additional evidence was obtained and collected.

As a result of the investigation, Connor Uhde age 19 of Estherville and CeJay Van Der Wilt, age 18 of Rockwell City, were each charged with Murder in the 1st Degree in Emmet County. 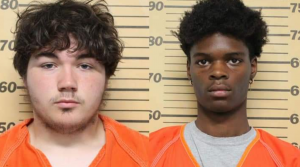