ESTHERVILLE – An Estherville man fueled by meth was caught by cops after burglarizing his neighbor repeatedly.

On September 20th at around 9:36 A.M. officers of the Estherville Police Department were dispatched to a local garage for a burglary had taken place. Officers met with the owner of the garage at the time of the call, and established that there were several items taken from the unoccupied structure within the past two to three weeks. The owner showed officers a door and window that had been pried on for the individual to gain access. The individual made forced entry through a locked door. Officers were given an initial list of missing items while on scene. The owner informed officers that he had observed some of the missing items from his shop in a neighboring garage.

Later in the day, around 1:00 P.M, officers were called back to the area by the original complainant. The owner stated that a male individual residing at 208 1st Avenue South was currently loading a torch into the back of his vehicle. The torch was believed to be one of the items taken from the garage during the burglary. Officers arrived at the residence a short time later and met with Charles Doucet. Officers conducted search of the property at 208 1st Avenue South and conducted an interview with Doucet. Following the initial interview officers continued their investigation.

A short time later, officers spoke with Charles at the police department. At the conclusion of the interview officers returned to the property at 208 1st Avenue South and were once again conducted a search of the property. Officers were able to identify several items that were described as items that had been missing from the burglary. Officers took possession of several items during their search. Many of the items taken were positively identified by the victim as being taken during the burglary. During the search officers also located several items of paraphernalia and a white crystalline substance believed to be methamphetamine. 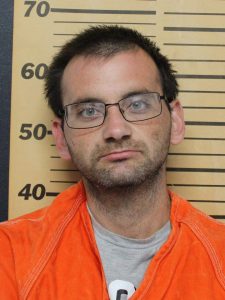