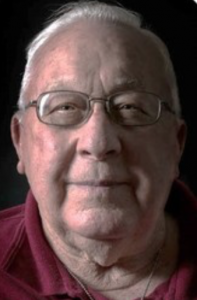 Private family services for Darrel will be held.

Darrel David Bunkofske, son of William and Myrtle (Harsch) Bunkofske, was born on June 7, 1935 in Swea City, Iowa. He passed away on Saturday, September 25, 2021 at St. Mary’s Hospital in Rochester, Minnesota at the age of 86.

Darrel attended country school for the first two years and for his remaining schooling he attended Swea City Consolidated. On July 27, 1956 he was united in marriage to Lois Heidt in Elmore, Minnesota. The couple made their home in the Swea City area, farming together. In 1958, he enlisted in the United States Army. He was honorably discharged in 1960. After retiring from farming in 2000 , the couple moved into town. Lois passed away on September 30, 2016.

Darrel was a member of the Open Bible Church in Swea City and served as a trustee for the Harrison Township Cemetery Board. He enjoyed NASCAR races and collecting Dale Earnhart, Sr memorabilia. Darrel and Lois enjoyed taking trips to Branson, Missouri many times. Collecting electric trains brought Darrel great joy.

He is preceded in death by his parents, his wife Lois, his great-granddaughter Rachel, and his siblings Cecil Bunkofske, Dwayne Bunkofske, Donald Bunkofske, Elaine Berhow, Vivian Aasby, and Dorothea Guge.