CEDAR FALLS – Nineteenth-ranked Missouri State outscored UNI 31-23 in the second half pulled away down the stretch and picked up a 66-55 win Friday evening in the McLeod Center.

The loss is the home loss of the season for UNI and drops the Panthers to 13-8 on the year and 5-5 in Missouri Valley Conference play while the Bears move to 19-3 on the year and 9-1 in MVC play with a game lead on the field for first place.

The two teams started hot with points on the first five possessions of the game, but both defenses stiffened for the rest of the quarter. Missouri State closed the first with an 8-1 run to take a 17-13 lead into the second.

The Panthers battled back to take a 30-28 lead with 3:13 left in the half, but again the Bears closed on a 7-2 run, including a layup and a free throw in the final seconds to take a 35-32 lead into the half.

UNI was just 8-22 (36.4%) from the field in the second half and was 0-4 from the three-point line in the fourth quarter as Missouri State built a double-digit lead en route to the 11-point win.

Karli Rucker led UNI with 13 points while Cynthia Wolf added 10 points on 4-5 shooting, including a pair of three-pointers. The Panthers were 18-45 (40%) from the field and 6-20 (30%) from the three-point line. UNI gave up 18 turnovers while the Bears tallied just eight.

NOTES
– The loss is the first of the season for the UNI women. The Panthers started the season with eight consecutive home wins, the longest home winning streak to start the season since 1980-81 when the Panthers won their first 10 home games.
– The last time UNI lost a game in the McLeod Center was March 9, 2019, against Illinois State.
– Karli Rucker led the Panthers with 13 points. UNI is now 7-2 when Rucker is the leading scorer.
– Rucker had four assists. It is the 11th time this season that Rucker has had four or more assists in a game.
– Cynthia Wolf scored in double figures for the third time this season. All coming in the last six games.

UP NEXT
The Panthers host Southern Illinois Sunday at 2 p.m. at the McLeod Center. It is the annual Pink Game. UNI coach Tanya Warren and SIU coach Cindy Stein will donate $25 each for every three-pointer that their respective teams make to the Beyond Pink TEAM. SIU is also 14-8 and 5-5 in MVC play after falling to Drake 91-76 in Des Moines. 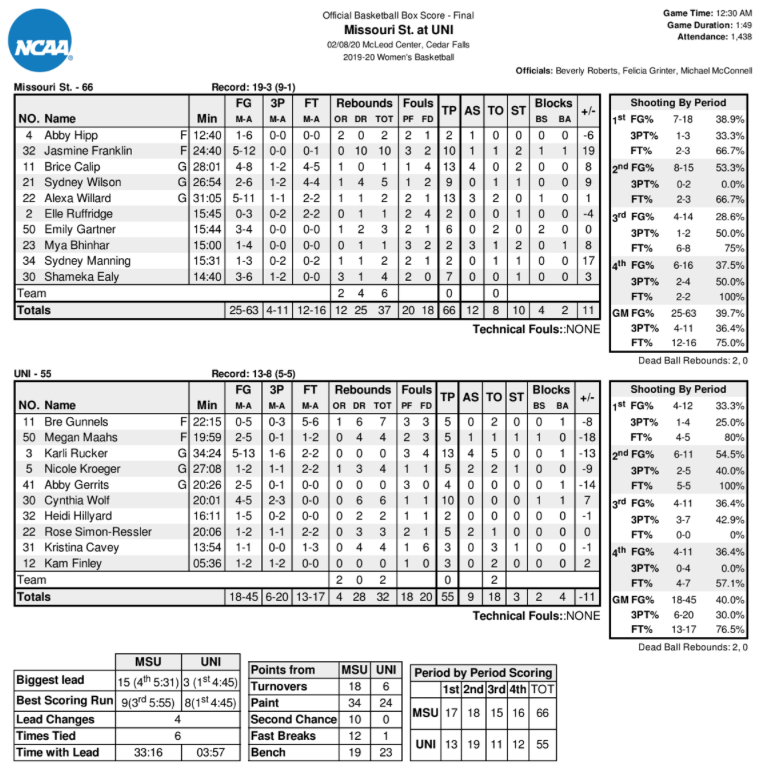