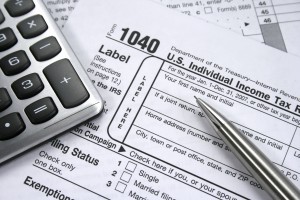 DES MOINES – Gov. Kim Reynolds and Lt. Gov. Adam Gregg unveiled the most significant tax reform package in decades on Tuesday, allegedly providing immediate relief to middle class workers, small business owners, famers, families and teachers across Iowa, making good on the commitment she made in her swearing in address last May and again in her Condition of the State address in January. 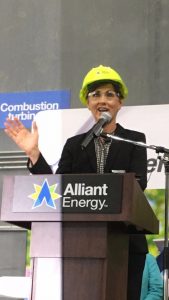 “My plan combines meaningful tax relief while protecting our budget priorities,” Gov. Reynolds said. “We’ve prioritized tax relief for middle class taxpayers, small business owners, teachers and working families across the state. We’re long past due for real tax reform that simplifies and updates our system while allowing Iowans to keep more of their hard-earned money in their communities.”

“I’ve always said people can have it all when they live in Iowa: lower cost of living, shorter commutes and vibrant communities,” Lt. Gov. Gregg said. “Now, they can have even more through a simpler tax code that rewards middle class taxpayers, small business owners, teachers and working families.”

f. Iowans will, for the first time, be able to invest in section 529 plans tax-free for K-12 tuition – not just higher education – allowing for more choice in K-12 education.

4. Small businesses will see lower taxes
a. Iowa business owners will be able to deduct 25 percent of the new federal Qualified Business Income Deduction from their Iowa taxable income. This will allow Iowa’s job creators to keep more of hard-earned money.

b. The section 179 expensing limit will increase immediately from $25,000 to $100,000, allowing small businesses owners to invest in their companies and in Iowa.

b. The plan is projected to cut income taxes by $1.7 billion by 2023, while maintaining expected growth rates in revenue – even assuming no dynamic effect (economic stimulus) from federal or state tax reform.

c. The plan will also include revenue targets (or “triggers”) that will act as a safeguard in the event of a downturn in the economy.

d. And if there is significant economic growth, these triggers will accelerate the tax cuts and return greater savings to Iowa taxpayers.

b. Gov. Reynolds’ plan recognizes that the economy is changing and for our Main Street businesses to continue to thrive, Iowa needs to put them on a level playing field with out-of-state corporations.

c. All increases in sales tax revenue for these online sales will be passed on to Iowans through greater income tax cuts, ensuring that the size of the state’s government is left in check.

7. Simplified tax code
a. The Alternative Minimum Tax will be eliminated. This is an outdated provision that unnecessarily complicates the tax code.

i. Because of federal deductibility, Iowa has some of the highest tax rates in the nation. Only California, Oregon and Minnesota have a higher marginal tax rate than Iowa.

ii. Because of federal deductibility, Iowans will see an automatic tax increase as a result of the federal tax cut. In other words, when federal taxes go down, Iowa taxes go up automatically.

iii. Because of federal deductibility, Iowa taxes are the highest for many people the state wants to help the most. That’s because federal deductibility creates a tax environment that penalizes what the federal government prioritizes. Because the federal tax code recognizes the importance of raising a family and starting a small business, Iowa’s tax code is structured to automatically charge higher taxes to families and small business owners. For that reason, Iowa’s tax code creates disparities between taxpayers and makes Iowa uncompetitive with other states. Because of federal deductibility and federal tax reform and unless changes are made to Iowa tax code:

1. A small business owner with two children making $75,000 will pay 17 percent more in Iowa taxes than a single wage earner who makes the same amount.

2. It gets worse. The same small business owner would pay 25 percent less in state taxes if they moved across the border to Illinois. That’s just one example of how federal deductibility distorts Iowa’s tax code. The results are similar for families making less (e.g., $55,000) and more (e.g., $100,000). Iowa’s tax code is penalizing families, farmers and small business owners. That is not a reflection of Iowa values, so Gov. Reynolds’ plan phases out federal deductibility and significantly lowers rates. 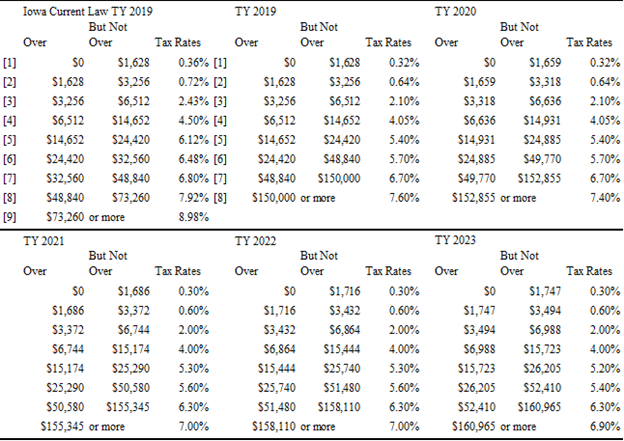