MASON CITY – A wanted Charles City man allegedly toting meth refused to stop for a police officer early Wednesday morning, leading to a high-speed chase and his eventual arrest after his car was rammed.

On Oct 11, 2017 at 3:48 AM, a MCPD officer attempted to stop a 1993 Olds Cutlass for speeding and a stop sign violation near Hwy 122 E and South Pennsylvania Ave. The driver refused to stop and accelerated eastbound on Highway 122. As the pursuit went eastbound out of town, a Cerro Gordo deputy became the primary unit and was escorted by MCPD units.

The fleeing driver went a short distance outside city limits, turned around, and then drove back into Mason City at a high rate of speed. Other MCPD units were unable to set out stop sticks due to the high rate of speed and directional changes.

The fleeing driver continued westbound into Mason City on Highway 122 at a high rate of speed. Near Highway 122 and Illinois Avenue, a Cerro Gordo county unit deliberately struck the fleeing vehicle, disabling both vehicles, but successfully ended the pursuit. There were no injuries and no other properly damage than the two vehicles that collided. Iowa State Patrol was then contacted to conduct the collision investigation.

During the booking process and vehicle impound and tow, officers found additional contraband. Officers allege that Kroeze had methamphetamine hidden on his person that he tried to conceal, displace, or discard at the Cerro-Gordo County Jail. 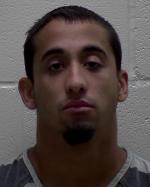