MASON CITY – An Ames man refused to stop for a deputy in downtown Mason City Tuesday night, leading to a pursuit and foot chase.

On October 10, 2017 at 10:38 PM a Cerro Gordo County Deputy attempted to stop a vehicle near the intersection of State Street and 1st Street SE. The green Chevy Malibu refused to stop and attempted to elude the deputy. The pursuit went east on State Street, west on 1st Street NE, north on North Connecticut, east on 2nd Street NE, north on North Massechusetts and continued north where the vehicle crossed railroad tracks, disabling the vehicle. Two subjects fled on foot and the driver was caught after a brief foot pursuit. The driver was identified as Alex Welch, age 25 of Ames. The passenger was identified but not charged with any crime. Welch was arrested and charged with driving while barred, an aggrevated misdemeanor; eluding a law enforcement vehicle, an aggrevated misdemeanor; carrying a dangerous weapon, an aggrevated misdemeanor; and possession of drug paraphernalia, a simple misdemeanor.

There were no injuries during the pursuit. 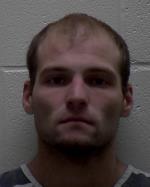