Apple plans to purchase 2,000 acres of land in Waukee. The first phase of the project is two state of the art data center facilities. They will serve North American users of iMessage, Siri, the App Store and other Apple services. Like all Apple data centers, the proposed facilities will run entirely on renewable energy.

“Apple’s significant investment and commitment to grow in Iowa is a clear vote of confidence in our state,” Gov. Reynolds said. “This announcement further solidifies Iowa as a hub where innovation and technology flourish and demonstrates this is a place where world-class companies can thrive.”

For the past 20 months, state, regional and local officials have been working with Apple to find a suitable Iowa location for the company’s next data center facility. The company selected a site on the west side of Waukee to build the first two buildings. Apple will also contribute up to $100 million to a newly created Public Improvement Fund dedicated to Waukee community development and infrastructure.

“The City of Waukee is excited to be selected for this project,” Mayor Peard said. “After the responsible leadership and planning from our city council and staff, we are thrilled to welcome Apple’s investment in the City of Waukee. We look forward to the great benefits this partnership will bring to our community as the project develops over the next two decades.” 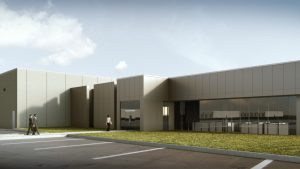 The IEDA worked with the Greater Des Moines Partnership and Waukee once the company’s project team narrowed its Iowa search to one site. Waukee acted to support the project Thursday morning with a local tax abatement and infrastructure improvements. Subsequently, the IEDA Board approved tax incentives via the High Quality Jobs program for the more than $1.3 billion project that will create at least 50 jobs at a qualifying wage of at least $29.12 per hour.

“Economic development projects are partnerships between companies, communities, states and others,” Lt. Gov. Gregg said. “Many individuals and organizations were involved in making this project a reality—one that will pay dividends for years to come.”

Data center projects have economic impact well beyond the permanent jobs created and the initial capital investment made. A recent study released by the U.S. Chamber’s Technology Engagement Center estimates that a typical data center employs 1,688 local workers, provides $77.7 million in wages, produces $243.5 million in output along the local economy’s supply chain and generates $9.9 million in revenue for state and local governments.

Every year thereafter, the data center supports 157 local jobs paying $7.8 million in wages, injecting $32.5 million into the local economy and generating $1.1 million in revenue to state and local governments.

Iowa is well-positioned to continue attracting data center investments in the future because of its geographic location safe from hurricanes, earthquakes and rolling blackouts, coupled with affordable electric rates and high percentage of electricity generated by wind.

FROM THE APPLE NEWSROOM:

Apple today announced plans to build a 400,000-square-foot, state-of-the-art data center in Waukee, Iowa, to better serve North American users of iMessage, Siri, the App Store and other Apple services. Like all Apple data centers, the new facility will run entirely on renewable energy from day one.

Apple’s investment of $1.3 billion will create over 550 construction and operations jobs in the Des Moines area, and the company is contributing up to $100 million to a newly created Public Improvement Fund dedicated to community development and infrastructure around Waukee.

Apple’s $1.3 billion investment will create over 550 construction and operations jobs in the Des Moines area.
“At Apple, we’re always looking at ways to deliver even better experiences for our customers. Our new data center in Iowa will help serve millions of people across North America who use Siri, iMessage, Apple Music and other Apple services — all powered by renewable energy,” said Tim Cook, Apple’s CEO. “Apple is responsible for 2 million jobs in all 50 states and we’re proud today’s investment will add to the more than 10,000 jobs we already support across Iowa, providing even more economic opportunity for the community.”

The new Public Improvement Fund, to be established and managed by the City of Waukee, will support the development of community projects like parks, libraries and recreational spaces, as well as infrastructure needs. The first project the fund will support is construction of the Waukee Youth Sports Campus featuring a greenhouse, playground, fishing pier and fields for high school and public sporting events.

Apple will be working with local partners to invest in renewable energy projects from wind and other sources to power the data center. Apple has pledged to power all of its global operations with 100 percent renewable energy, and has already reached that goal in the US and 23 other countries.

“We’re honored Apple is choosing Iowa for the site of its most technologically advanced data center to date,” said Iowa Governor Kim Reynolds. “Apple’s commitment to innovation and renewable energy leadership mirrors our own. This investment in our state is vital as we continue to develop as a technology hub and grow our workforce.”
“Waukee is proud to welcome Apple,” said Waukee Mayor Bill Peard. “This new facility will bring with it high-quality jobs and important infrastructure developments for the city. We look forward to a continued partnership with Apple on this effort for decades to come.”

Construction on the data center is expected to start early next year and Apple plans to bring it online in 2020.
Apple is one of the biggest job creators in the United States, responsible for 2 million jobs. Last year, Apple spent over $50 billion with more than 9,000 US suppliers and manufacturers. Since the launch of the App Store in 2008, US developers have earned over $16 billion in App Store sales worldwide.

DES MOINES – Following a joint announcement from Apple CEO Tim Cook, Gov. Kim Reynolds, Lt. Gov. Adam Gregg and Waukee Mayor Bill Peard on Thursday that the company will make a significant data center investment in Waukee, many are saying the center is a big win for the state.

“They say we should go to Iowa because we have these epicenters there. And as you look at the age demographics and the growth of Iowa, I think it’s really difficult to challenge the fact there are ancillary growth benefits from making an investment like this,” he said.

“Apple is going to continue to invest in that future, for Waukee, for Iowa and for America,” Cook said.

CNET: Apple’s next data center will be in Iowa

In addition to building the data center, Apple is giving up to $100 million to a public improvement fund that will support community projects and infrastructure needs in Waukee.

“This new data center will play a very important role in the App Store’s continued success. And as the App Store grows, we look forward to growing in Iowa,” Cook said.

“It’s a really positive thing for Iowa that these companies are putting their prized possessions in the hands of Iowa,” said Brian Waller, president of the Technology Association of Iowa. “I just think to have a fourth titan of the tech industry, and one you visibly hold in your hand or the majority of people hold in their hands, it’s just a great thing.”

Matthew Mitchell, an associate professor of international business and strategy at Drake University, said the incentives are part of doing business, and even with a tax break, the new center will have a huge economic impact.

“When I see the 71 percent abatement, I also think it’s about 29 percent revenues that didn’t exist the very previous day,” Mitchell said. “You have the prestige of doing business with one of the most successful companies in the world.”

“Across Iowa, businesses, schools, developers and government are coming together to build a new home for innovation in America’s heartland,” Cook said. “We see that commitment in Iowa’s education system and in the value that you place on creativity, adaptability and new ways of thinking….we admire what you guys have accomplished, and we want to be a part of it.”

Jay Byers, chief executive of the Greater Des Moines Partnership, said Thursday’sannouncement continues to enhance Iowa’s status as the “silicon prairie” and will further build out the supply chain associated with these large data centers.

“It’s a huge win for our economy,” Byers said. “Central Iowa is now a global hub for data centers.”

Tech companies are attracted to Iowa because of the prominence of its renewable energy industry – Governor Reynolds said that 36.6 percent of Iowa’s electricity was generated by wind last year, and Cook said that the Waukee center, like its other U.S. data centers, would be powered using 100 percent renewable energy.

Washington Post: Why Iowa is giving Apple $208 million for a project that will create 50 full-time jobs

This isn’t a deal about workers, though. At least, not directly. At a time when government officials are partnering with companies to boost employment, Apple’s agreement with Iowa lawmakers highlights another reason states are courting businesses with colossal discounts: corporate investments can help rural communities afford to grow.