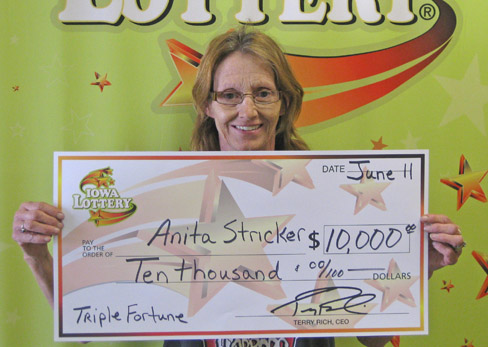 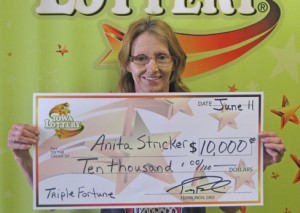 DES MOINES, Iowa – A Mason City woman said she thought she had won a $10 prize on her “Triple Fortune” scratch ticket, but after she uncovered the rest of the zeros she realized she had won a top prize of $10,000.

Anita Stricker, 55, said she stopped into her favorite retailer to pick up a few tickets, but never thought that would lead to her winning such a big prize.

“It was the first one I scratched off,” Stricker said. “I thought it was $10, so I kept scratching and saw a lot of zeros!”

Stricker couldn’t believe what she was seeing, so she rushed upstairs to wake up her son.

“He said, ‘Yeah, Mom, it looks like you won ten thousand dollars,’” Stricker said. “Then we both started jumping up and down.”

Stricker purchased her winning ticket at Northside Liquor and Grocery, 1303 N. Federal Ave. in Mason City. After telling her son, she called her dad.

“He said, ‘You sign that thing!’” Stricker said with a laugh.

“I just scratched it about 45 minutes ago,” she said as she claimed her prize June 11 at the Iowa Lottery’s regional office in Mason City.

Stricker said she plans to use some of her winnings to purchase a newer vehicle. She’s also thinking of visiting her family in Maryland.