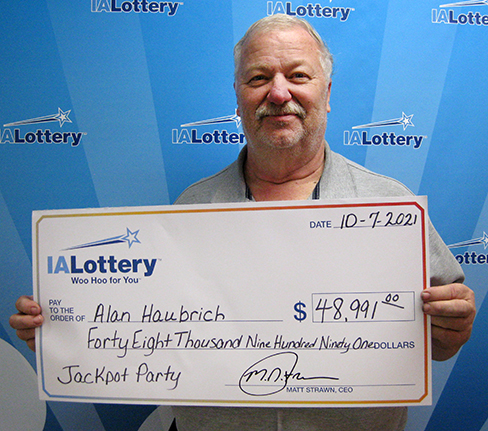 CLIVE, Iowa — A Mason City man who won a lottery prize of nearly $49,000 said the feeling was difficult to put into words.

“Boy, it’s hard to describe,” Alan Haubrich told officials on Thursday as he claimed his prize of $48,991 in the JACKPOT PARTY® Progressive InstaPlay game at the lottery’s Mason City regional office. “You get this feeling, and in my case, I think my wife was looking over me. She just passed away last month, so I think she had a hand in it, too.”

Haubrich, 66, a retired police officer, bought his winning ticket at Yesway, 1224 N. Federal Ave. in Mason City. When he uncovered a winning symbol on his ticket, he checked it on the store’s self-checker, then asked store employees to verify the win on the store’s lottery terminal, just to be sure.

“They checked it for me and I about fell over,” Haubrich said with a laugh.

He said store employees were excited for him, as were the two friends he meets for coffee each morning. He quickly made plans to claim his prize at the lottery’s office in town.

Haubrich said he plans to use part of his winnings to purchase a headstone for his wife, Sandy.

“It couldn’t have come at a better time,” he said.

The JACKPOT PARTY Progressive jackpot starts at $10,000 and increases with each ticket sold statewide until it is won.

The InstaPlay product combines features from instant-scratch and lotto games. InstaPlay tickets are called “scratchless” because they have no security coating that needs to be removed to determine the prize won. And rather than having supplies of tickets printed in advance like those in traditional scratch and pull-tab games, InstaPlay tickets are printed on demand from the lottery terminal.