FOREST CITY – A Lake Mills man jailed for possession of methamphetamine during a theft in Mason City was caught with the dangerous drug earlier and faces more charges.

Forest City police on July 15 came into contact with Nicholas Dee Karalius, age 21 of Lake Mills. That morning, he was arrested and charged with Possession of a Controlled Substance. Karalius was arrested on a warrant at which time he was found to have Methamphetamine on his person.

Later, on the afternoon of August 22, Mason City police officers were sent to Best Buy on a report of someone trying to return a stolen Kindle worth $134.00 for a cash refund. Officers verified the Kindle was still entered as stolen from Forest City and arrested Karalius for 5th degree Theft. Karalius was allegedly found in possession of suspected methamphetamine during this arrest. Due to prior convictions, he was charged with Possession Controlled Substance (Class D Felony) and taken to jail. 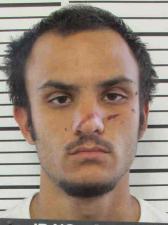