CHARLES CITY – A Charles City man is in jail after police discovered he broke into a vending machine.

Daniel Leroy Connerley, age 39, is being held in the Floyd county jail at this time on charges of third-degree theft, second-degree theft, possession of a controlled substance, possession of drug paraphernalia and ongoing criminal activity. These charges come after Charles City police responded to the 1900 block of Clark Street for a report of a theft on the afternoon of August 14. A vending machine at the Tobacco Outlet had been broken into, with an estimated property loss of $1,688.

Connerley awaits a hearing on August 24. Connerley was guilty of fifth-degree theft earlier this year in Cerro Gordo county after an arrest by Mason City police. He was also guilty of littering in Floyd county this year. 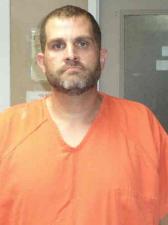