Newsflash: Throwing cigarette butts onto the street could be dangerous (video) 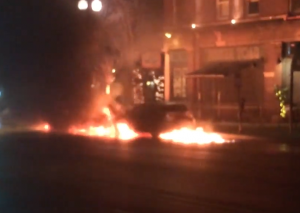 OMAHA – A fire erupted and a car burned after a cigarette smoker decided to litter the streets with the butt of his stogie.

Police in Omaha, Nebraska advised that “It is NOT okay… let us repeat this… it is NOT okay to throw your cigarette butts out your car window.”

The officer called for a fire truck and grabbed his fire extinguisher, the Omaha police department said in a statement, and worked on putting the car fire out until the Omaha Fire Department got there.

“All of this could have been prevented had the litterer used that little built in device in their car. You know, the one that is made for cigarette butts and litter.”

Police said whoever is responsible for the fire is unknown.

6 Responses to Newsflash: Throwing cigarette butts onto the street could be dangerous (video)