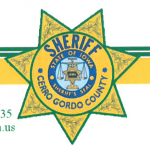 MASON CITY – An alert Cerro Gordo deputy spotted a stolen car in Mason City and attempted to make a traffic stop Monday night, but the driver fled through the county at speeds reaching 120 miles per hour before he was caught running through a corn field miles away.

The deputy located the stolen 2009 Hyundai Sonata from Cedar Rapids Monday night at about 9:16 PM near 19th Street and South Federal Avenue. He pursued until Highway 18 and then attempted to pull the vehicle over. However, the driver turned west and fled.

Mason City police were called in to assist along with more deputies as the driver continued west, entering the eastbound lanes of Highway 18 at times, and increasing speeds. He eventually went south on Interstate 35, where he reached speeds over 120 miles per hour. The driver then headed west on county road B43, and then turned south onto Grouse Avenue, south of Clear Lake.

Next, the driver left the roadway into a ditch and struck a Mason City police department patrol vehicle before entering a corn field. The vehicle became stuck there, and the driver fled on foot. A short foot pursuit ended when he was caught.

The driver was identified as 29-year-old Douglas McCleary of Cedar Rapids. He was transported to Mercy Medical Center by Mason City fire medics with minor injuries. The female passenger in the car was evaluated and released with no charges.

No officers were injured in the pursuit.

McCleary is facing numerous charges, including felony eluding and charges relating to the stolen vehicle. The total charges McClearly will face were still being tallied as of early Tuesday.