CHARLES CITY – He’s been found passed out in a yard, drunk at K-Mart and has at least three drunk driving convictions, now he’s in jail on a harassment charge.

Michael Handt, age 58 and now residing in Charles City, was arrested by Charles City police on the evening of July 15 after they were called to the 500 block of 7th Avenue. He was charged with harassment in connection to a no-contact order. Handt was also wanted for failing to show up in court earlier that day in connection to his latest public intoxication charge. On the evening of July 7, Handt was discovered passed out by police in the intersection of South Joslin and Court Streets and taken to jail.

Handt has been arrested for public intoxication at least three other times this year. On the afternoon of June 21, Charles City police discovered Handt laying in the grass at the 500 block of 7th Avenue, and he was taken to jail. He was charged with the same crime on June 13 and April 17 of this year.  Mason City police arrested Handt in 2011 after he was found passed out in Kmart’s entrance.

Handt is a multi-convicted drunk driver, resulting in a felony in 2006, in which he lost his driver’s license for 6 years. 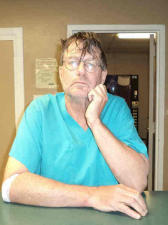