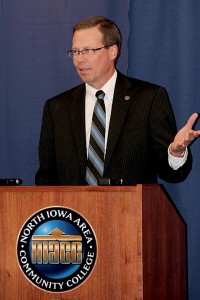 The goal of our Keeping NIACC First Capital Campaign is $15 million. The NIACC Foundation has been working behind the scenes and with NIACC to identify and secure funding in the form of Federal and local grants, private donations and internally generated funding. Through those efforts, Keeping NIACC First Campaign has found great support and success, securing over $10 million to support the needs. That leaves a balance of $4.5 million which is still needed from private investments and grants. Now the effort will go forward throughout North Iowa and the country, seeking support from our alumni, friends and businesses. Through the targeted areas for improvements, students in these core and emerging critical fields will have modern facilities and equipment to learn the skills needed for success. “Without the continued support of generous donors, these needed facility improvements will likely go unmet,” NIACC President Steve Schulz said.

The Keeping NIACC First Capital Campaign aims to complete the building projects and enhancements in time for the 100th anniversary of the College’s founding in 2018, according to Schulz. 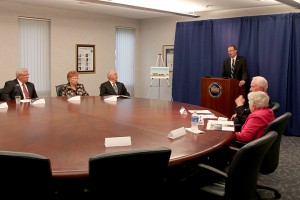 Honorary campaign co-chairs include Eugene and Mary Sukup, of Sheffield, and O.Jay and Pat Tomson, of Mason City. Also co-chairing the campaign are Gary and Vicki Wattnem, of Mason City, and David Steffens, Jr., of Lake Mills.

“We recognize the importance and value of NIACC’s service through its superior education, partnership, and leadership, and we have reached a crossroads where critical enhancements must be made in order for the College to stay the course as an educational leader. Therefore, we are excited to serve as Honorary Co-Chairs and Co-Chairs for the Keeping NIACC First Capital Campaign,” according to a statement from the Campaign Co-Chairs and Honorary Co-Chairs.

Following the counsel of area business, industry, and community leaders, the priorities where the Capital Campaign will make the greatest impact at NIACC became clear:

Science, Technology, Engineering, and Math (STEM) classrooms and lab equipment – The science wing was added to McAllister Hall in 1979, and the used equipment installed in that area was donated to NIACC by Mason City High School. In order to provide quality science, technology, engineering, and math (STEM) programming, a remodeling and expansion of the existing facility is needed to meet the teaching and learning needs of today’s students.

Health Simulation facilities and equipment – The construction of a state-of-the-art health simulation lab is necessary to meet the needs of NIACC students pursuing a career in the healthcare industry. Currently, the industry is experiencing a serious shortage of healthcare practitioners and support personnel. In addition to nursing, the Simulation Center will meet the training needs of individuals and communities providing emergency medical services. The Simulation Center will expand NIACC’s ability to increase and enhance training opportunities for the communities of North Iowa.

Piano upgrades and music enhancements – As part of NIACC’s commitment to excellence in music and performance, steps must be taken to improve the quality of the pianos, which are critical instruments for instruction and performance for both students and professional performers scheduled at the North Iowa Community Auditorium. NIACC’s fleet of pianos has served the College for decades and is presently nearing the end of useful life with several of the pianos suffering from cracked keyboards, making replacement a better option than attempting repairs. In order to care for the pianos, enhancements to maintain humidity and temperature controls and monitors must be structurally included to protect the investment in the future so the pianos last long-term and do not see stresses as in the past. Upgrading the pianos and providing for enhancements in the music area will help to preserve and strengthen NIACC, which benefit all of North Iowa.

Diesel facility – Discussions with employers in the transportation industry were held as part of the Capital Campaign Feasibility Study. These individuals identified a shortage of workers throughout the industry. These needs are supported by the current and projected job openings in the Iowa Workforce Development Agency’s Middle Skills Job Report. Our rural economy relies heavily upon transportation to deliver the goods and services provided by business and industry in North Iowa. NIACC is committed to creating a Diesel Technology Center to provide training for the transportation, maintenance, and repair industry.

Meeting these challenges will require a concerted effort from all of North Iowa and those who support NIACC. In the coming weeks, volunteers will visit the College’s friends, alumni, employers, and supporters to discuss these critical enhancements that NIACC needs to continue in its leadership role.