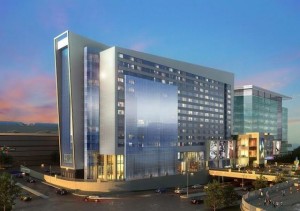 BLOOMINGTON – Ground was broken today in Bloomington, Minnesota on a massive expansion of the Mall of America.

“Today we broke ‘ground’ on the future expansion of Mall of America. That’s right, we’re growing! Thank you to all of our friends + partners for making today possible, we thank you!” the mall announced on its web site.

“Today, March 18, 2014 marks the official groundbreaking of the new expansion. This morning, Mall of America, Shakopee Mdewakanton Sioux Community, Mortenson, City of Bloomington, state and local leaders and guests came together to commence this magical moment.”

The mall has been open for about 22 years.

When complete in August 2015, the roughly $300 million expansion will include: