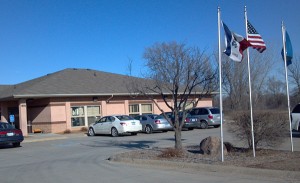 Beje Clark in Mason City: Only a few reported “escapes” each year, according to a report.

DES MOINES – We all know of the hemorrhage of wrongdoers from our local halfway house, Beje Clark, and now an Iowa labor leader says it’s happening all over the state and Governor Branstad is to blame.

“These work release escape numbers confirm what our members have long known based on the facts on the ground that they see every day. Our state’s correctional system, both in our prisons and community based corrections, is severely understaffed.

“Our correctional system staff work hard every day to protect the public and promote rehabilitation; however, there simply aren’t enough staff to properly do the job. The governor’s correctional policies are failing Iowans by not putting proper rehabilitation and public safety first and foremost.”

A Lee newspaper reporter claims that Iowa is on pace for 361 escapes this year. The same report says only a handful of actual “escapes” are reported each year at Mason City’s Beje Clark.