MASON CITY – A Mason City man convicted last year in a meth case is back behind bars after a judge issued a warrant for his arrest earlier this week.

An arrest warrant was issued for Aaron Max Biddick, age 42, on July 7 in a meth case in which Biddick pleaded guilty last year and was given probation and suspended prison sentences and fines. It was his third or subsequent offense. Mason City police located him at his home on 15th Street NE Friday and took him to jail. 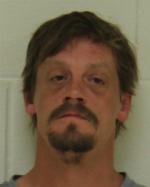