ESTHERVILLE – A man was arrested after he was found to be in possession of meth while driving his motorcycle, and later found to possess a firearm.

According to Estherville, Iowa police, on Friday, July 10, 2015 at approximately 11:38 AM, an officer with the Estherville Police Department conducted a traffic stop on a motorcycle in the 1400 Block of 4th Avenue North in Estherville. The driver of the motorcycle was identified as 37 year old, Paul Michael Thornburg of Estherville. Thornburg was placed under arrest for Driving While Revoked and taken into custody.

An Emmet County Deputy Sheriff assisting the officer located a small bag of white crystal substance believed to be methamphetamine during the impoundment and inventory of the motorcycle. Thornburg was subsequently charged with Possession of a Controlled Substance (Methamphetamine) 2nd Offense, an Aggravated Misdemeanor.

At approximately 2:47 p.m., officers of the Estherville Police Department and K9 Max executed a search warrant for illegal drugs at the Thornburg residence located at 808 North 14th Street. During the search warrant, officers located numerous items of drug paraphernalia, a substance believed be to be marijuana, ammunition and a firearm. 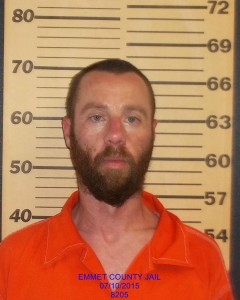