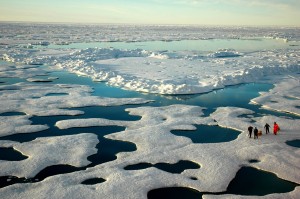 COPENHAGEN, DENMARK, November 2 – Human influence on the climate system is clear and growing, with impacts observed on all continents, A United Nations research group has concluded. If left unchecked, climate change will increase the likelihood of severe, pervasive and irreversible impacts for people and ecosystems.

However, options are available to adapt to climate change and implementing stringent mitigations activities can ensure that the impacts of climate change remain within a manageable range, creating a brighter and more sustainable future.

These are among the key findings of the Synthesis Report released by the U.N.’s Intergovernmental Panel on Climate Change (IPCC) on Sunday. The Synthesis Report distils and integrates the findings of the IPCC Fifth Assessment Report produced by over 800 scientists and released over the past 13 months – the most comprehensive assessment of climate change ever undertaken.

“We have the means to limit climate change,” said R. K. Pachauri, Chair of the IPCC. “The solutions are many and allow for continued economic and human development. All we need is the will to change, which we trust will be motivated by knowledge and an understanding of the science of climate change.”

The Synthesis Report confirms that climate change is being registered around the world and warming of the climate system is unequivocal. Since the 1950s many of the observed changes are unprecedented over decades to millennia. “Our assessment finds that the atmosphere and oceans have warmed, the amount of snow and ice has diminished, sea level has risen and the concentration of carbon dioxide has increased to a level unprecedented in at least the last 800,000 years,” said Thomas Stocker, Co-Chair of IPCC Working Group I.

The report expresses with greater certainty than in previous assessments the fact that emissions of greenhouse gases and other anthropogenic drivers have been the dominant cause of observed warming since the mid-20th century.

The impacts of climate change have already been felt in recent decades on all continents and across the oceans.

The more human activity disrupts the climate, the greater the risks. Continued emissions of greenhouse gases will cause further warming and long-lasting changes in all components of the climate system, increasing the likelihood of widespread and profound impacts affecting all levels of society and the natural world, the report finds.

The Synthesis Report makes a clear case that many risks constitute particular challenges for the least developed countries and vulnerable communities, given their limited ability to cope. People who are socially, economically, culturally, politically, institutionally, or otherwise marginalized are especially vulnerable to climate change.
 
Indeed, limiting the effects of climate change raise issues of equity, justice, and fairness and is necessary to achieve sustainable development and poverty eradication. “Many of those most vulnerable to climate change have contributed and contribute little to greenhouse gas emissions,” Pachauri said. “Addressing climate change will not be possible if individual agents advance their own interests independently; it can only be achieved through cooperative responses, including international cooperation.”

“Adaptation can play a key role in decreasing these risks,” said Vicente Barros, Co-Chair of IPCC Working Group II. “Adaptation is so important because it can be integrated with the pursuit of development, and can help prepare for the risks to which we are already committed by past emissions and existing infrastructure.”

But adaptation alone is not enough. Substantial and sustained reductions of greenhouse gas emissions are at the core of limiting the risks of climate change. And since mitigation reduces the rate as well as the magnitude of warming, it also increases the time available for adaptation to a particular level of climate change, potentially by several decades.

There are multiple mitigation pathways to achieve the substantial emissions reductions over the next few decades necessary to limit, with a greater than 66% chance, the warming to 2oC – the goal set by governments. However, delaying additional mitigation to 2030 will substantially increase the technological, economic, social and institutional challenges associated with limiting the warming over the 21st century to below 2oC relative to pre-industrial levels, the report finds.

“It is technically feasible to transition to a low-carbon economy,” said Youba Sokona, Co-Chair of IPCC Working Group III. “But what is lacking are appropriate policies and institutions. The longer we wait to take action, the more it will cost to adapt and mitigate climate change.” The Synthesis Report finds that mitigation cost estimates vary, but that global economic growth would not be strongly affected. In business-as-usual scenarios, consumption – a proxy for economic growth – grows by 1.6 to 3 percent per year over the 21st century. Ambitious mitigation would reduce this by about 0.06 percentage points. “Compared to the imminent risk of irreversible climate change impacts, the risks of mitigation are manageable” said Sokona.

These economic estimates of mitigation costs do not account for the benefits of reduced climate change, nor do they account for the numerous co-benefits associated with human health, livelihoods, and development. “The scientific case for prioritizing action on climate change is clearer than ever,” Pachauri said. “We have little time before the window of opportunity to stay within 2oC of warming closes. To keep a good chance of staying below 2oC, and at manageable costs, our emissions should drop by 40 to 70 percent globally between 2010 and 2050, falling to zero or below by 2100. We have that opportunity, and the choice is in our hands.”

The Synthesis Report, written under the leadership of IPCC Chair R.K. Pachauri, forms the capstone of the IPCC Fifth Assessment Report. The first three volumes, based on outlines approved by the IPCC’s 195 member governments in October 2009, were released over the past fourteen months: The Physical Science Basis in September 2013, Impacts, Adaptation and Vulnerability, in March 2014 and Mitigation of Climate Change in April 2014.

IPCC reports draw on the many years of work by the scientific community investigating climate change. More than 830 coordinating lead authors, lead authors and review editors from over 80 countries and covering a range of scientific, technical and socio-economic views and expertise, produced the three working group contributions, supported by over 1000 contributing authors and drawing on the insights of over 2,000 expert reviewers in a process of repeated review and revision. The authors assessed more than 30,000 scientific papers to develop the Fifth Assessment Report. About 60 authors and editors drawn from the IPCC Bureau and from Working Group author teams have been involved in the writing of the Synthesis Report. Their work was made possible by the contributions and dedication of the Synthesis Report Technical Support Unit.

“I would like to thank the hundreds of experts from the world’s scientific community who have given freely of their time and expertise to produce the most comprehensive assessment of climate change yet undertaken,” said Pachauri. “I hope this report will serve the needs of the world’s governments and provide the scientific basis to negotiators as they work towards a new global climate agreement.”