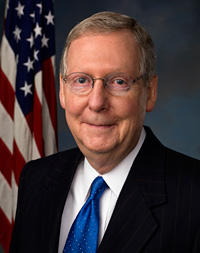 In an appearance on NBC’s “Meet the Press,” McConnell echoed language used by other Republicans on Sunday talk shows this week to describe the White House’s handling of the Internal Revenue Service’s targeting of conservative political groups applying for tax-exempt status, the terrorist attack on a U.S. mission in Libya, and the Justice Department’s seizure of Associated Press reporters’ telephone records.

“Actually, there is a culture of intimidation throughout the administration,” he said. “The IRS is just the most recent example.”

McConnell alleged Secretary of Health and Human Services Kathleen Sebelius is trying to shake down health insurance companies in an effort to “convince the public that they should love” the Affordable Care Act. He charged Federal Communications Commission officials are trying to “shut down or make difficult people who are seeking to buy advertising to criticize the administration,” and said Obama appointees to the Securities and Exchange Commission “have been engaged in an effort to make it difficult for corporations to exercise their First Amendment, political rights.”

Asked whether he has “any evidence that the president of the United States directed what you call a culture of intimidation at the IRS to target political opponents,” McConnell said, “I don’t think we know what the facts are.”

“Well, what we’re talking about here is an — an attitude that the government knows best, the nanny state is here to tell us all what to do and if we start criticizing, you get targeted,” he said.

Senior White House adviser Dan Pfeiffer, who appeared on several other Sunday talk shows as well, rejected the suggestion there is “some big cloud of scandal” over President Barack Obama.

“I think we’ve seen this playbook from the Republicans before,” Pfeiffer said. “What they want to do when they are lacking a positive agenda is try to drag Washington into a swamp of partisan fishing expeditions, trumped up hearings and false allegations. We are not going to let that happen.”

He said there is no evidence to support a suggestion by U.S. Rep. Dave Camp, R-Mich., the chairman of the House Ways and Committee, that the White House has engaged in “a culture of coverups and political intimidation.”

Pfeiffer acknowledged there is “a breach of the public trust and we have to work together to rebuild that trust,” and called on Republicans “to do this in a legitimate, serious governmental way and not play politics with it.”