CLEAR LAKE – A Clear Lake woman is in jail after pleading guilty to operating while under the influence (1st offense) and assault on a police officer.

Shelby Dee Kirchgatter, 34, plead guilty on May 13th to a drunk driving charge after Clear Lake police were called to a Wendy’s restaurant on March 5th, 2013.  Employees of Wendy’s had called police and complained that Kirchgatter and two other women were intoxicated, loud and disorderly inside Wendy’s, Clear Lake police said.  When officers arrived the females were in a truck that was in the drive through. A partially full Vodka bottle was found inside the vehicle.  Kirchgatter was arrested at the scene and also charged with assault on a peace officer and others, to which she also plead guilty on May 13th.  Bridgett Stitt was charged with disorderly conduct while the third female was not charged.

Also on May 13th, Kirchgatter plead guilty to serious assault and second degree harassment, stemming from a January 7th, 2013 incident where charges were brought by Clear Lake police.  She was sentenced to 7 days in jail and a year of probation.  She also must pay $1,058.65 fines, fees and court costs. 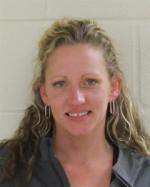