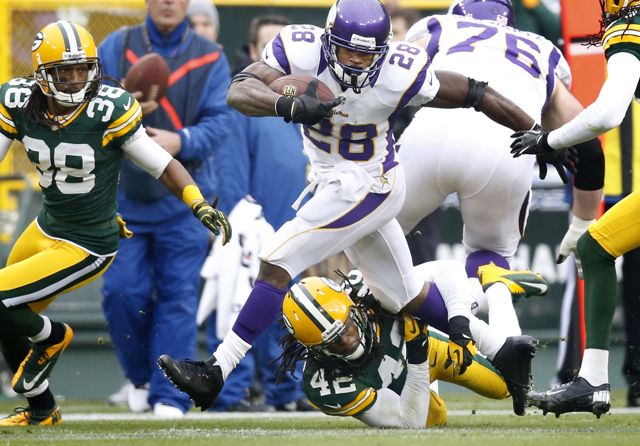 Those were the thoughts circling Lambeau Field late in the first half Sunday.

Vikings star Adrian Peterson was in the south end zone hosting yet another energized party an instant after taking a handoff from Christian Ponder deep inside Vikings territory and delivering his best home run cut.

First, Peterson beat linebacker A.J. Hawk to the edge. Then he slipped an ankle tackle from Morgan Burnett. From there, he knifed between M.D. Jennings and Tramon Williams, barely felt Mike Neal’s diving tackle attempt and out-sprinted Casey Hayward to the end zone.

Just like that, the Vikings had a 14-10 lead over Green Bay, getting exactly the kind of big play needed to spark a road upset.

But hours later, Sunday’s final score provided a 23-14 defeat, the torpedo that will likely sink the playoff ship.

You just don’t see this kind of thing often, this MVP-caliber brilliance coupled with the haphazard manner in which the Vikings have squandered it.

“It’s very disappointing,” Peterson said. “Especially when we run the ball like we did today. And you just look at it and say, ‘It was all for nothing.’”

The unraveling again traces back to a young quarterback and a flat-lining passing attack that’s proven hard to revive.

Over the past six games, Peterson has rushed for 947 yards, scored six touchdowns and averaged 7.8 yards per carry. Yet over that same time, Ponder has thrown for just 871 yards with a 5.0 yards per attempt average.

It doesn’t add up.

Said coach Leslie Frazier: “Just so disappointed that we couldn’t win this game when (Adrian) had such a great day, in this environment. You want to see him celebrate. But it’s so hard to celebrate after today’s loss.”

The first came on the opening series of the second half, two snaps after Peterson’s 48-yard run ushered the Vikings inside the Green Bay 12.

Yet on second-and-6 from the 8, Ponder rolled right, forced a throw across his body toward Michael Jenkins and was picked off in the end zone by Burnett.

“The number one rule as a quarterback,” Ponder said, “is to not throw across your body, across the middle of the field.”

That it was Ponder’s 13th turnover in the past eight games only intensified the sting.

“We’re in great position,” Frazier said. “We would have gone up 21-10 or 17-10, either way with a field goal or touchdown. The way our defense was playing, you’d love to let Jared (Allen) and those guys pin their ears back and rush at that point. But it didn’t happen.”

Instead, Green Bay turned that takeaway into a 47-yard field goal. Soon after, the Packers went ahead 20-14, thanks to a 22-yard James Starks touchdown run with 2:12 left in the third quarter.

And on the ensuing series, Ponder delivered his second pick, Burnett stealing a pass toward Kyle Rudolph at the Green Bay 14.

“That hurts, man,” Peterson said. “You get down into the red zone, guys are playing good ball and when you turn it over, it hurts.”

Ponder finished with 119 passing yards — brutal on the surface but even more startling considering seven of his 12 completions and 83 of those passing yards came in the final 4 minutes.It’s even more disconcerting given how Peterson running, in theory providing the punch that should loosen things up for the passing attack.

“It’s a combination of things,” Frazier said. “We have to find a way to get open. We’ve gotta do a good job in protection. And when guys are open, we’ve got to be able to pull the trigger and get it to them.”

That’s “Passing 101.” Yet the Vikings seem stuck at a remedial level. Even as Peterson, their premier playmaker, delivers the most splendid season of his career.