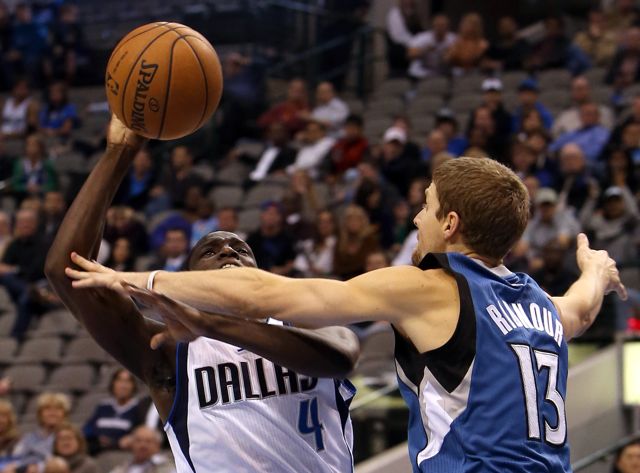 The injury-ravaged Timberwolves somehow won yet another game on Monday, but lost yet another player at least for the evening in a 90-82 victory at Dallas.

The Wolves started the game without starters Kevin Love, Ricky Rubio and Brandon Roy as well as top reserves J.J. Barea and Chase Budinger, who injured a knee on Saturday in Chicago that will require surgery this week.

And then they lost starting center Nikola Pekovic, who left the game late in the third quarter with a sprained left ankle and did not return.

That left small forward Andrei Kirilenko as the only Wolves player still on the floor who’d be a starter when everyone is healthy.

Of course, everyone is not.

And still they won, persevering with a makeshift lineup that carried the Wolves to their fifth victory in their first seven games on a night when Mavericks coach Rick Carlisle, like Pekovic, never saw the game’s end.

The Wolves did so with Russian rookie Alexey Shved playing a career-high 33 minutes off the bench and with fellow countrymen Kirilenko following Saturday’s 42-minute game at Chicago by playing another 44 minutes on Monday.

Pekovic became the latest Timberwolves players to go down in pain when he ran down the court side by side with Mavericks swingman Vince Carter then turned his ankle after inadvertently stepping on Carter’s foot.

He went down in a heap on the court and later was helped to the team’s locker room with his night over after he delivered 20 points and six rebounds through fewer than three quarters.

A team that started the game with just 10 healthy players was now down to nine, so Wolves coach Rick Adelman simply sent reserve center Greg Stiemsma into the game for Pekovic even though he would finish the game with a small lineup that featured Kirilenko, Shved, starting point guard Luke Ridnour, Dante Cunningham and either Lou Amundson or Derrick Williams.

Adelman started second-year guard Malcolm Lee at shooting guard in place of Budinger, who had started Saturday’s game there in place of Roy.

He said he started Lee because he wanted to keep Shved in his familiar role off the bench and because he thought Lee’s defense was best suited to try to slow down hot Dallas guard O.J. Mayo.

Lee started the game, but Shved was on the floor to finish it with a 16-point, 5-assist performance that included a three-pointer that put the Wolves ahead 82-70 with 4:20 left.

The Mavericks got within 85-78 with 2:14 left after they went on an 8-3 run, but Dallas guard Darren Collison missed a soaring slam-dunk attempt down the lane and then missed a layup in the final two minutes. By then, Carlisle was in the Mavs’ locker room after he was ejected with five minutes left. He was whistled for two quick technical fouls while arguing a call and was gone for the night.

The Mavericks themselves played Monday without injured superstar Dirk Nowitzki and starter Shawn Marion. Nowitzki underwent arthroscopic surgery on his right knee last month and is expected to miss at least the season’s first month.