Vikings’ kickoff, punt returns too much for Lions

This news story was published on September 30, 2012.
Advertise on NIT • Subscribe to NIT 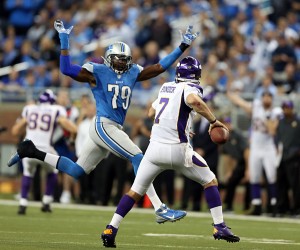 DETROIT — Percy Harvin returned the opening kickoff 105 yards for a touchdown and Marcus Sherels added a third-quarter score on a punt return as the Lions lost their third straight game, 20-13, Sunday to the Vikings at Ford Field.

“Frustrating,” quarterback Matthew Stafford said. “We obviously don’t like losing football games. Keep shooting ourselves in the foot. Offense, defense, special teams, everybody’s had a hand in it. We deserve our record, obviously, and we are what we are.”

A quarter of the way through what was supposed to be a special season, what the Lions are right now is not a very good team.

They’ve allowed four special-teams touchdowns this year — two in each of the last two weeks — and head into the bye 1-3 and in last place in the NFC North.

“There’s a reason we’re 1-3 and it hasn’t been bad luck,” Lions coach Jim Schwartz said. “We’ve made ourselves have to overcome way too much, even going back to the opener. We won (but) we were minus-three in turnovers. We were lucky to win that game. Last week (and) today, five non-defensive scores, and today we weren’t able to overcome it scoring enough on offense.”

According to Stats LLC, the Lions are the first team since at least 1940 to allow punt- and kick-return touchdowns in back-to-back games.

Harvin delivered the first gut punch when he cut across field and ran untouched down the home sideline with the opening kick to give the Vikings’ a 7-0 lead 12 seconds into the game.

Schwartz said Jason Hanson’s kickoff to the back left corner of the end zone was “great” — location was a problem on both the kick- and punt-return touchdowns they allowed last week — but several Lions couldn’t shed their blocks as Harvin cruised by.

“That’s tough, especially when you’re all excited defensively, ready to go out and set the tone and you don’t get an opportunity,” defensive end Kyle Vanden Bosch said. “It’s tough, but it’s something that needs to be fixed and will be fixed.”

On Sherels’ 77-yard punt return, gunner Kassim Osgood missed an open-field tackle and Sherels weaved through a slew Lions to the Minnesota sideline where he followed a wall of blockers to the end zone.

As bad as the Lions were on special teams Sunday, their problems didn’t end there.

On second-and-goal from the 13 late in the first half, Vikings safety Harrison Smith knocked a would-be touchdown from Johnson’s hands with a big hit in the end zone. One play later, Pettigrew dropped a sure score and the Lions settled for a 31-yard Hanson field goal.

Trailing 20-6 early in the fourth quarter, the Lions drove to the Minnesota 7, where the Vikings got good pressure on Stafford three straight plays and finally buried him for a sack on fourth down.

Stafford scored the Lions’ only touchdown on a 1-yard dive on their next possession, but the Lions’ desperation final drive petered out before crossing midfield.

Adrian Peterson led Minnesota, a surprising 3-1 and atop the NFC North, with 21 rushes for 102 yards.

Stafford finished 30 of 51 passing for 319 yards and was sacked five times – more than he was the first three games combined — and receiver Nate Burleson said the Lions have two weeks to figure out how to turn around what has the makings of a disastrous season.

“I think dreading on the loss is good,” Burleson said. “Sit back and think about it. Figure out how angry you want to come back and return during the season. Figure out the reason for the season.

“We got to get motivated by something. Now that the hype is gone and everybody’s off the bandwagon, hopefully people start writing about us, that’s good. Now we can get back to guys in this locker room, just get back to being angry at everybody. Let’s get back to that attitude we had when we felt disrespected by every team we faced. Let’s feel like that kid that needs to prove himself on the playground again.”